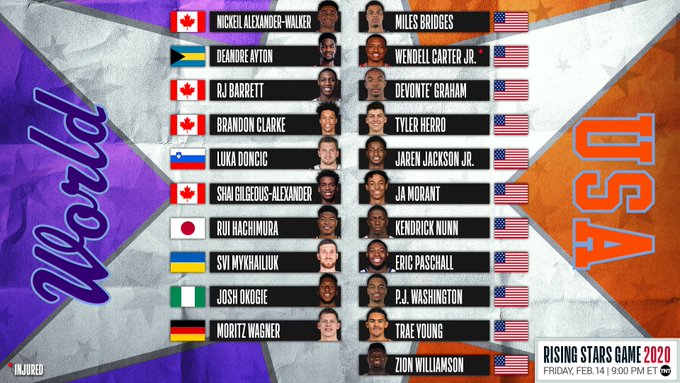 All-Stars Luka Dončić of the Dallas Mavericks and Trae Young of the Atlanta Hawks lead the list of 20 players selected by NBA assistant coaches to play in the 2020 NBA Rising Stars at the United Center in Chicago. The 26th Rising Stars will pit 10 first- and second-year NBA players from the United States against 10 first- and second-year NBA players from around the world in the league’s annual showcase of premier young talent during NBA All-Star.  Rising Stars will air live at 9 p.m. ET on TNT and ESPN Radio in the United States.

Tickets are available at NBAEvents.com.

Dončić and Young return to NBA Rising Stars after playing in last year’s game as rookies.  They have also been voted to start the 2020 NBA All-Star Game, marking the first time that multiple second-year NBA players will start an All-Star Game since 1996 (Grant Hill and Jason Kidd). The U.S. Team includes three players from the Hornets and two each from the Heat and the Grizzlies. Miami’s Nunn and Memphis’ Morant have won both Kia NBA Rookies of the Month in the Eastern Conference and the Western Conference, respectively, this season. The World Team features four players who participated as campers in Basketball Without Borders (BWB), the NBA and FIBA global basketball and development community outreach program: Ayton (BWB Global 2016), Barrett (BWB Global 2017), Hachimura (BWB Global 2016) and Gilgeous-Alexander (BWB Global 2016). A record four Canadians are participating in Rising Stars: Alexander-Walker, Barrett, Clarke and Gilgeous-Alexander.  Alexander-Walker and Gilgeous-Alexander are cousins. Hachimura is the first player from Japan to be named to a Rising Stars roster.  He became the first Japanese player ever selected in the first round of the NBA Draft when the Wizards made him the ninth pick in 2019. NBA assistant coaches selected the Rising Stars rosters, with each of the league’s 30 teams submitting one ballot per coaching staff.  A ballot consisted of four frontcourt players, four guards and two additional players at either position group for each team.  Voters also had to choose a minimum of three first-year NBA players and three second-year NBA players for each team.  Coaches were not permitted to vote for any player on their team.

The coaching staff for the Rising Stars teams will consist of assistant coaches from the NBA All-Star Game.  Rising Stars will be a 40-minute game with four 10-minute periods.  An MVP award will be given out at the conclusion of the game.

Below are the rosters for the 2020 NBA Rising Stars and a list of past results.

About NBA All-Star 2020: NBA (NBA.com) All-Star 2020 in Chicago will bring together the most talented and passionate players in the league’s history for a global celebration of the game.  The 69th NBA All-Star Game, which will take place on Sunday, Feb 16 at the United Center, will reach fans in more than 200 countries and territories in more than 40 languages.  TNT has telecast the All-Star Game for the 18th consecutive year, marking Turner Sports’ 35th year of NBA All-Star coverage.  United Center will also host Rising Stars on Friday, Feb 14 and State Farm All-Star Saturday Night on Feb 15.  The NBA All-Star Celebrity Game presented by Ruffles on Feb 14 and the NBA All-Star Practice & Media Day presented by AT&T on Feb 15 will take place at Wintrust Arena.