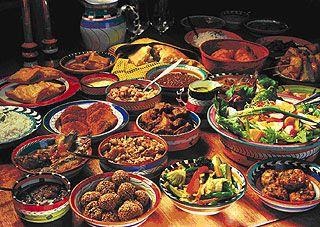 African food is a journey through its culture and diversity that extends differently from the east to the west and north to south with some mouth-watering and exquisite cuisine. With most of its dishes encompassing curries and stews that comprises vegetables, meat and milk, African food dishes can sway your palate as well as your heart.

So, if you are on the country’s cultural journey, here are 5 of the West and South African delectable food that you shouldn’t miss-

A West African star food delicacy, Joll of Rice is famous around countries like Ghana, Nigeria, Senegal. This rice is a prominent dish that is cooked in tomato puree to give it a red hue, the dish is served with vegetables, chicken, beef or fish.

Made primarily from onions, beans, red pepper and chillies with a hint of oil, Moin Moin is a steamed pudding from Nigeria’s stable cuisine that expanded to the neighbouring places as well, owing to its popularity. While at some places like Ghana, Moin Moin is enjoyed with a spicy millet porridge, in others it is served with fried plantains and Joll of rice.

With a buttery smooth texture that garners the meat and vegetable flavours, Cachupa is a stew with a flavourful delectable taste that resonates with its ingredients. From vegetables such as plantain, squash, sweet potato, beans and corn, the stew once regarded as poor man’s food is now a cultural definition of West Africa.

A spicy South Africa cuisine that goes spicy on the palate includes the tinge of ginger, chilli, bean, bell paper, carrot, onion and tomato. With its origin dating to the land of Johannesburg, Chakalaka is most often combined with other vegetables and consumed cold or with a thick sour bread called amasi.

A part of Africa’s long list of soups and stews, Shiro is a dish prepared with chickpeas and beans that form the main ingredient of this delicious dish. The addition of ginger, garlic, onions, pepper and chopped tomatoes give this dish an aromatic flavour. Shiro is considered the auspicious food that is eaten mostly during the occasions of Lent and Ramadan.

Besides the list of top 5, every part of Africa offers a delectable palate worthy dish with uniqueness as its USP. This lavish spread forms the cultural identity of the continent and is combined with amazing desserts and refreshing beverages to please the taste buds.