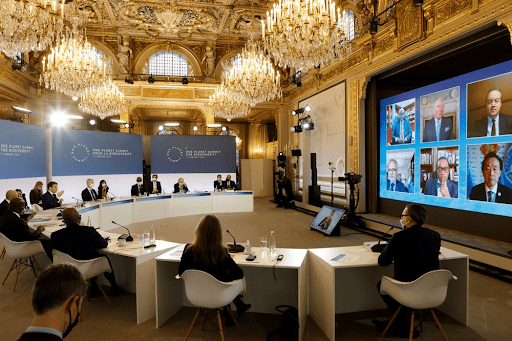 French President Emmanuel Macron, left, speaks during the One Planet Summit, at The Elysee Palace, in Paris, Monday Jan. 11, 2021. Global leaders seek to put efforts to protect the planet on top of this year's international agenda as environment talks focusing on biodiversity are set to take place on Monday. (Ludovic Marin, Pool Photo via AP)
Spread the news

At least 50 countries worldwide have announced that they will be providing 30% protection of land and sea by 2030 in order to preserve ecosystems and combat global warming.

Around 30 leaders, government officials and heads of international organisations participated in the One Planet Summit being held via videoconference in an attempt to save the planet from a catastrophic and deadly disease outbreak. Presidents of the United States, Russia, India and Brazil were conspicuous by their absence from the summit.

In a bid to bolster the growing ambition to protect the environment, French President Emmanuel Macron announced that the High Ambition Alliance for Nature and Citizens, which was launched in 2019 by Costa Rica, France and Britain, has now been joined by fifty countries.

The main focus of the day-long summit was the long-term conservation of biological diversity and ecosystem preservation. They looked at how human activities could be causing an upswing in the spread of tropical diseases, and vice versa.

The summit dedicated a programme that presented an international campaign, PREZODE, against the spread of infectious disease. Scientists have concluded that the coronavirus that first appeared last year in China most likely originated from an animal source.