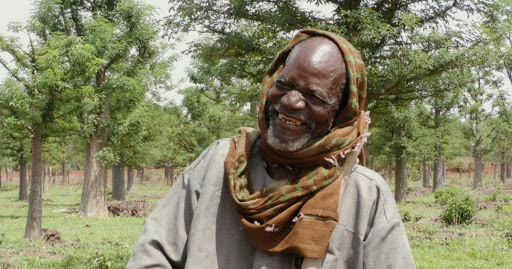 The man who defied all odds, planted baobab forest in his village while taking the issue of climate change into his hands. El Hadji Salifou Ouédraogo, for the last 47 years has been nurturing and protecting his planted forest cover of Baobabs that provides food to his villagers and preserves the lifecycle while protecting climate from deforestation.

The expansive forest cover has in the past years become his family and village. This old man with a youthful and charismatic spirit has committed his life to plant baobabs and continues to do so that attracted the attention of climate revolutionaries and filmmakers to meet with him and take his voice to the global level for the amazing work he is doing.

Originally from Titao, El Hadji was approached by Filmmaker Michel K Zongo and made a documentary ‘The Man Who Plants Baobabs’ on this man who contributed his life to community uplifting. In the documentary, El Hadji talks about his birthplace Titao, which is also the village of his parents. He also shares how growing up he wanted to become a Quran Master but instead ended up planting mango trees. However, as he grew up, he realized that everyone around was planting mango trees and felt the urge to go in a different direction as an escape route to things going sideways.

What started as an escape route for El Hadji became a passion of life, despite no support from his villagers who told him that he wouldn’t survive his work and called him crazy. He recalls the opposition from his villagers acted as an encouraging factor for him to work even harder in planting baobabs. He also says that planting a baobab tree is very important for Muslims and wishes to spread this idea to others to visit him or get influenced by him.

He also talks about the vitality of Baobabs fruit for humans as it helps in balancing blood sugar levels. Baobabs contain a good amount of minerals, antioxidants, and vitamins that aid in weight loss and maintaining digestive health.