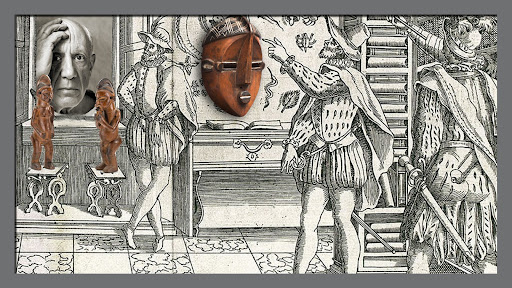 African culture and art represent transnationalism which has influenced the western art world to a great extent. From north to south and east to west, African art incorporates the framework for mankind. Encompassing one of the most beautiful and diverse richness in its art form, African art resonates with its cultural identity, years of transformation, and social and religious contexts.

Historical Context of African Art: The Cradle of Mankind

The archaeological site in Johannesburg, South Africa is referred to as the Cradle of Humankind for its significance on the ancient tools and fossils found on early humans called the hominins. With varied fossils unearthed at the caves of Sterkfontein that date back to millions of years and are speculated to belong to the Australopithecus Prometheus species.

With this, it is the prehistoric rock art that gives the world an insight into the richness of African ancient craft. Tracking back to thousands of years old, rock art shaped the historical identity of the continent and let the world peek into the early inhabitants of Africa.

It also represents the vital starting point for African art from the hunter-gatherer lifestyle during its prehistoric era to the first-ever known West African art suggesting the cultural settlements using varied materials and tools in the continent.

These artworks, from the prehistoric caves to traditional canvases devised an art symbolization for the continent that spread to different directions in its indigenous ways. Every object or canvas represented a notion depicted in an aesthetic manner. It is either linked to its religion, rites of passage, moral and societal values, rituals, hierarchy, or kingdoms.

Human figures in African art were usually created with larger-than-life features portraying the purpose behind their craft. For example, human figures would usually have exaggerated eyes or heads which indicated that the head is the most vital of the entire body and it reflected success.

African artistic sculptures, masks, or statues maintained a pivotal part in its historical culture and a mode of communication from the ancestors before Islam and Christianity penetrated into the continent’s religion. This resonated with the locals wearing masks that meant for the embodiment of a deceased entity. Masks were usually worn during initiations, funerals, or cultural celebrations.

The characteristics of African Art

African art has some characteristics that are common and inherent in its portrayal of animals and figures. These common traits offer information into its social, religious, and political realms as well as a fine categorization of the indigenous class.

The importance of Human Figure

African art portrayed most of its sculptures in the human figure and presented it in all its glory. Through these figures, the early people would express their ideas on life and the spirit world. They also used animal figures to express a human trait and hierarchy.

The smooth and curved surfaces represented immaculate qualities and perfection in African art.

Human figures in African art were depicted as mature and youthful which indicated good health, vigor, fertility, and stature.

Symmetry and abstraction were keenly adhered to, in African sculptures. For example, in the figures, the head was usually enhanced by a bigger size, they would have long necks to indicate the presence of jewelry, and women figures would have large breasts and a large stomach to indicate fertility.

Africa and the World

While African art is fairly continental, its reach has paved its popularity to the continents beyond it. This is transparent after the colonial period when African art made its way to the European and the Western world. However, there still exists a considerable debate over the property of African art and whether it represents just the aesthetics or a knowledge way beyond appearances.