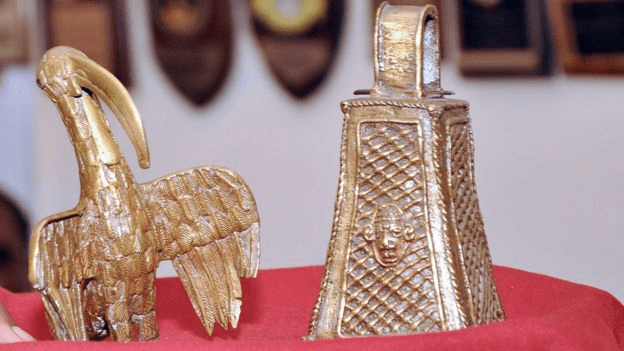 These Benin Bronze artefacts were returned to in Nigeria in 2014 by a British pensioner Photo source: BBC
Spread the news

Thousands of artifacts have been ransacked by European and British museums and institutions in African cities more than a century ago. After decades of African promotions, such as the bronzes of Benin to come back home, the home of the looted artworks finally started looking like a real choice. But a new market for Afro-artifacts and art has emerged in the midst of the global economic crisis caused by the spread of the coronavirus which devastated economies.

Christie’s, the British auction house, announced in Paris that they would sell the curated “Arts of Africa, Oceania and North America” including the newly found Akan Terracotta Head (Ghana) as well as Benin Bronze and Urhobo (Nigeria). Artifacts from all over Africa from € 30 000 to €900 000 range in terms, including Nigeria, Ghana, Gabon and the Democratic Republic of Congo. The auction of Christie is in conflict. Christie can only ensure the bronze head ‘s origin as long as 1890-1949 as it was in Vienna and New York as part of Frederick Wolff-Knize ‘s collection.

The Benin Bronze Plaques, introduced by Christie are quite similar to bronze plaques from the St. Petersburg and Berlin Museums; well-documented artworks in the history of the Royal Court during the 1897 invasion of the city of Benin, part of its looted artifacts. Sotheby’s, revealed the selling of “The Clyman Fang Head,” an approximate amount of between $2,5 and $4 millions from the Sidney and Bernice Clyman Collection, on 27 Mai, at an ambitious auction house created by the British founder. A total of 32 African works will be sold at Sotheby’s via a series of auctions.

In 1897, British troops destroyed a large portion of Benin, a city in southern Nigeria burning the palace to the ground and looting 4,000 works of art including the famous Benin brass heads and bronzes. A high-profile report by Senegalese writer/economist Felwine Sarr and French historian Bénédicte Savoy called for thousands of African artworks in French museums taken during the colonial period to be returned to the continent. The British Museum has announced plans to “lend” some of the artworks to a proposed new museum in Benin City billed to open in 2021. One of the major criticisms of demands for the returns of artworks back to African countries has been the general absence of museums and proper maintenance culture.

This crown is admired for its filigree designs and religious embossed images from V&A Museum
Photo source: BBC

Prince Shyllon believes that it should not yet be the Nigerian art ecosystem, especially as it is often demonized local attitudes towards historic artifacts. The name of the museum was proclaimed a possible home for any African artistic works that come home.

Data Inputs from qz.com and BBC