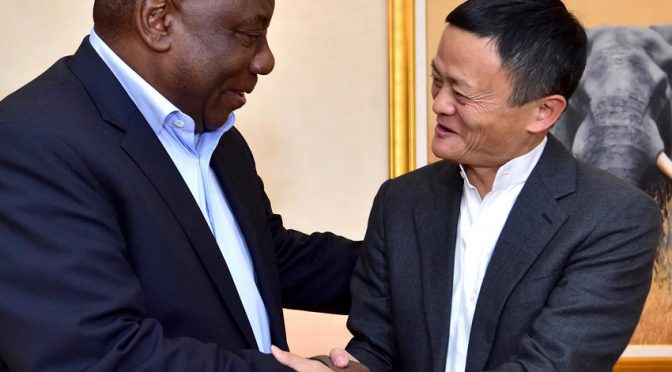 President of South Africa Cyril Ramaphosa received a courtesy call from Jack Ma, founder of the Alibaba Group, ahead of the ‘Netpreneurs: Rise of Africa’s Digital Lions’ conference which is taking place in Johannesburg today.

Jack Ma visited South Africa for the first time to launch a new initiative for African entrepreneurs called the Netpreneur Prize with $10-million in funding.

The prize aims to build a community of 100 young, African entrepreneurs by 2030 who will receive grants totalling $10 million.

As the executive chairman of Alibaba, he uses his Jack Ma Foundation to foster entrepreneurial initiatives, including this one.

The digital economy conference is organized by the United Nations Conference on Trade and Development (UNCTAD), whose Secretary-General, Dr. Mukhisa Kituyi, will give an address on Africa’s digital transformation.

The President was visibly excited to meet the Chinese business magnate. In one of his social media posts, he wrote, “I had the pleasure of meeting with one of the world’s foremost entrepreneurs and investors, founder of the Alibaba Group, Mr Jack Ma. We exchanged views and had a good discussion on the global economy and prospects for investment in South Africa. I wish him all the best with his visit.”