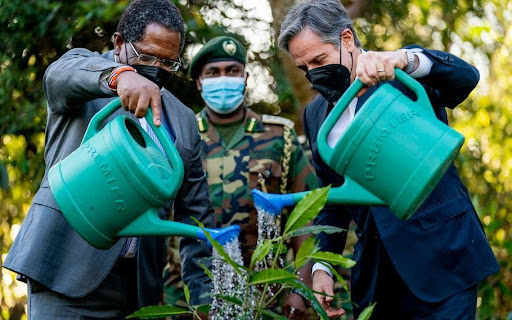 According to the US Secretary of State, Antony Blinken, there is a substantial shift in how the US perceives and speaks about the African continent, as its ally. While he talked about the future partnerships with the country, he also mentioned that America’s chief diplomat views Africa as the future that can no longer be ignored.

An estimate declares that by the year 2050, one in four people across the globe would be African. This world population dividend will transform global affairs in the coming years; however, the challenges still persist. Mr. Blinken further added that the US under Biden’s administration will focus on the engagement on five areas of development: Trade enhancement, fight against Covid-19, Climate change, security & peace, and democracy promotion.

US trade with Africa spreads across 54 countries which accounts for less than 2% of the total external trade and is dominated by oil exports. As part of the previous US government launched programme, Prosper Africa, Mr. Blinken touted the aim of enhancing two-way investment and trade. While there have been previous attempts at achieving the goal with the Africa Growth and Opportunity Act (Agoa).

Second, on priority for the US state towards Africa is the 2019 Covid-19 pandemic that crippled the economy and exposed the vulnerabilities in the basic healthcare sector. Under the new public-private initiative taken by the US- The Global Covid Corps, businesses will connect America to those countries across Africa that need logistical support.

However, the business initiative in the healthcare sector falls short of the claims and health advocates are calling out for waiving the intellectual property rights by the manufacturers. This will allow the developing countries for the mass production of vaccines to cater to their population.

Encompassing the climate change crisis debate, the African continent comes as the most vulnerable to the damaging impact of climate change contributing factors. Since the Obama-led government which focussed on connecting masses to the grid, still continues to rely heavily on renewable resources. It will be further added to the surfacing of wind and solar farms across the African continent.

Mr. Blinken’s visit had another vital talking point of “A global democratic recession” in the African continent. Moreover, an American official acknowledged the vulnerability surrounding US’s challenges to democracy. Mr. Blinken condemned the misuse of technology by dictator leaders and added that technology must be used to strengthen democracy rather than undermine it.

The growing challenge on peace and security continues that can be tied to political stability and the climate crisis. The newly appointed US-Africa policy on security & peace is based on equal partnership.

With a welcome change, the US expects Africa to play an influential role in politics, security, and the global economy.