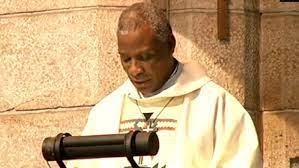 Archbishop Thabo Makgoba in his Christmas Eve message at the St. George Cathedral cautioned about the growing distrust in the current democratic government. His statement was supported by the misuse of public funds by the government and their failures towards the people of the country.

He stated that the people of South Africa have become distrustful of the politicians which was clearly illustrated from the Afrobarometer survey conducted this year. This Christmas eve message was loud and clear demanding that coalition politics will not work towards improving the people’s lives, the country poses serious dangers and will eventually drive towards authoritarian rule drifting away from democracy.

He also said that such a drift has never ended well, and it is already understood by those Africans who live under a dictatorship. Talking about the issues, he mentioned that more than 300 people died while thousands were displaced, destroying their lives in the KwaZulu-Natal and Gauteng incidents that took five months ago. He praised South African media in his speech saying that they are the only ones who gained the trust of the people during the trying times. South African media has uncovered the gruesome incidents and exposed the private and public sector corruption, not to mention the mishandling of the Covid-19 pandemic by the Department of Health.

He further encouraged the people of South Africa to get themselves vaccinated in view of the recent Omicron outburst.