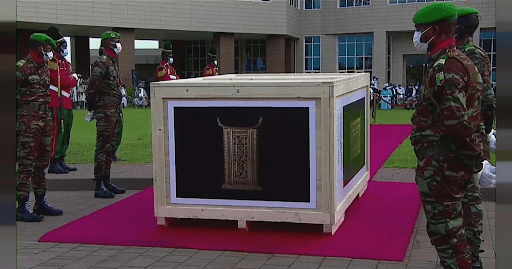 Benin received nearly 30 royal treasures on Wednesday  which were looted from the West African state. It was  during the time of France’s colonial rule and goes back more than 130 years ago. Patrice Talon, Benin’s President and the country’s culture minister travelled on Tuesday to Paris to bring the treasure comprising the 26 artefacts, part of France’s President Emmanuel Macron’s bid to restore African heritage.

The plane landed on Wednesday afternoon at Cotonou airport, the economic capital of Benin. The people of Benin in hundreds were gathered to pay homage, dance and celebrate.