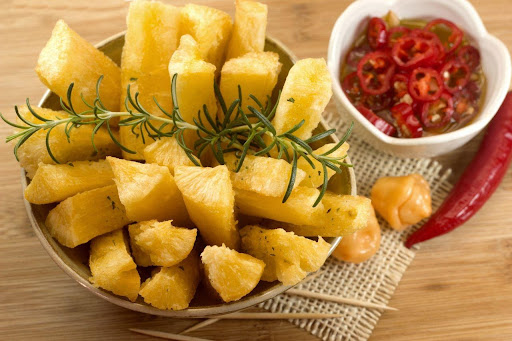 Cassava root or Aipim, as it is most commonly called in the local areas, is grown mostly on the outskirts of Santa Cruz district, Rio de Janeiro and is considered to be of high quality. With its popularity across Brazil, Cassava root is used in a variety of cuisines.

The scientific name of the plant is Manihot esculenta and it is native to South America that is cultivated for its starchy tuberous roots, in the tropical regions. Harvesting Cassava root is fairly easy, where it is pulled from the ground, separating the roots from the stem that is then kept for generating new plants.

Northern Brazil is the biggest consumer of the Cassava root and its fresh roots can be found all across the region. Cassava root is central to Brazilian cuisine and is used for both savoury and sweet dishes. People often use the whole root and sometimes it’s starch called tapioca to create delicacies across the country.

Cassava root, on the other hand, is popular for its nutty flavour that besides its amazing taste is a great source of carbohydrates and calories for people. The topical crop is drought tolerant and can handle almost every harsh weather condition. While both sweet and bitter Cassava dish is famous amongst Brazilians, its sweet dish, often known as yuca or Brazilian arrowroot is common around Brazil.

This delicacy also comes with medical benefits that benefit those people who suffer from allergies, considering Cassava root is gluten-free, nuts free and grains free. However, it is essential that people cook Cassava root before consuming it because the raw form of its root is poisonous to human health.

Cassava root is also available in the processed versions across Brazil, but the form might lack various nutrients such as vitamin C, minerals, fibre and resistant starch that are present in the natural version. However, it is vital that the processed root be cooked before consumption to avoid any possible side effects.

For the delicacy delights, go ahead by peeling, soaking, cooking and pairing the root with protein to keep it safe and benefit the most out of it.