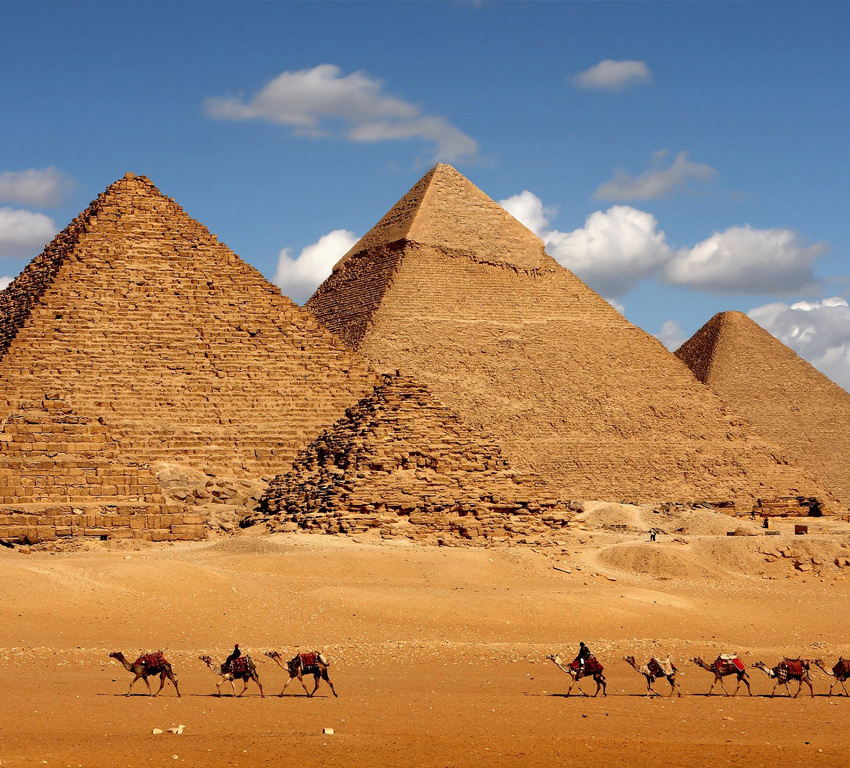 The Arab republic of Egypt, a democratic republic, commonly known as Egypt’s is a silent beauty. This nation is one of its kind. Its beauty lies in its culture and heritage. Egypt may not have many natural attractions but man has surely made its mark by building one of the most unique structures that is; the pyramids.It is mostly comprised of desert area. Trees, forests, and tropical areas are rare here. It can get as unique as possible; it is situated on the northeast corner of Africa and southwest corner of Asia by a land bridge formed by the Sinai Peninsula. Hence it is called a transcontinental country.

The country is divided into two sections namely the Upper Egypt, in the south and the Lower Egypt, in the North. Such classifications are done on the basis of the River Nile as it flows in the direction of south to north. The river merges into the Mediterranean Sea. Geographically, Egypt without the river Nile, would just be a simple desert.The southern part of Egypt’s landscape is covered by low mountains and deserts whereas; the northern side of it only consists of valleys near the Nile and desert in the east and the west. There only about an inch of rain fall throughout the country each year. But every summer without fail, the river rises because of rains at its source far to the south in Ethiopia. Floods cover the river’s valleys, leaving sediments needed for trees, plants, and crops to grow.Cairo, the capital of Egypt, belongs to its northern end. The essence of the capital lies in its structure and its camaraderie with the River Nile. The capital and the complementary river are sprawling the triangular Nile River Delta. This fertile land is completely covered with farms.

When someone says Egypt, the first thing that occurs to the mind is the Sahara Desert and mummies. Even though it’s true that Egypt has many unique historical stories and theories but the hidden reality is that it is beyond those heaps of sand and those long pyramids. Egypt is like home for a wide variety of animals and plants. They include the jackals, gazelles, crocodiles, and cobras. The main highlights in wildlife are in its 20 and more protected areas which include oases, coastal areas, river islands, and wetlands. As turning back the chapters to the history, ancient Egyptians left carvings and paintings of large animal species like elephants, hippos, leopards, and cheetahs. They were once very common in Egypt but are now rare or extinct because of hunting and habitat loss.

Around 90% of the Egyptian population consists of Muslims and the remaining are Copts, which are amongst the oldest branches of Christian religion. However, the population of the country is growing swiftly, resulting in restrictions and strains on resources. Native sin Egypt is mostly based on the land alongside the Nile River. Children are highly valued, especially in the rural regions where the children of the family help at the farms. Other than this they are expected and told to look after their parents in their old age. The population, history, geography and military strength of the country have left a huge impact and have influenced others around the region.Along with oil and gas export ventures, Egypt’s tourism industry remains a key part for the boost in its economy. Visitors flock to the country to see ancient monuments like the Great Pyramids and the Sphinx and other globally recognized monuments.

There absolutely no reason as to why such a country which rich culture, background and History should not be in the spotlight!!