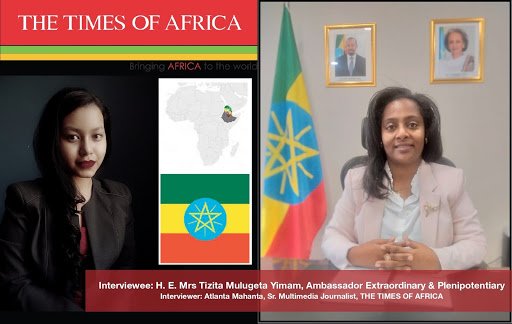 Q. Ethiopia’s forces are “Closing In” on Tigray region capital. The region also accuses the federal government forces. Is Ethiopia on the brink of civil war?

A. Unlike what is being wrongly narrated in the media,   what is going on is not a civil war.  It is an operation of maintaining law and order in the Tigray region.

Among all, it is the mandate of the federal government to protect the civilians and right of citizens in all regions of the country and the government is undertaking the operation to make sure law and order are ensured in the region.

Q. UN says planning for 200,000 Ethiopian refugees in Sudan. There were concerns about diseases spreading amongst the crowds, of whom nearly half are children.

A. Basically, there is no ground for the refugee number to grow that much because what is being done is a short time law enforcement operation. We hope it will be concluded shortly.

Of course, it is the responsibility of the government to protect civilians from causalities and   provide basic needs to its citizens including those affected by the ongoing operation to ensure rule of law and bring the criminals to justice in the Tigray regional state,

So currently the government through the ministry of peace, administration of refugees and returnees   is working in close coordination with international humanitarian organizations such as UNHCR, UNOCHA,

The government is also called upon the helping hand of all citizen to help to restore the displaced people so as to enable them to resume their normal life ASAP.

Q.  What was the real cause and how it all started?

A. Even if the immediate cause of the law enforcement operation happens on November 4, starting from April 2018 the TPLF clique were resisting to accept the reforms that took place in the country.

The current government with its political culture of love, peace, unity and reconciliation tried all its best to observe the situation patiently and calls for different reconciliation efforts. It was always open for peaceful discussion. Despite all the efforts of the government, the TPLF clique insists on preaching hate and criminality.

While the national election that was to be held in May 2020 was postponed for undefined time because of covid 19, the TPLF undertook their unconstitutional regional election in September 2020. The election was void and not acknowledged by the House of Federation.

While we come to the immediate cause, on 04th November 2020  the Tigiran special force violently attacked the northern national command and the federal police force who was taking care the people of Tigray and the buffer zone for more than 2 decades, the act was totally inhuman, criminal and shameful.

Q. How this is going to end? How do you access the outcome of this war?

A. As it is said now and then this is a ‘’law enforcement operation’’ that is conducted with a specific aim.  First to bring law and order to the Tigray Region. The second aim was to bring those criminals who directed the attack into account and the third aim is to bring them to justice.   A lot has been done and now the government is in the last stage of the operation.