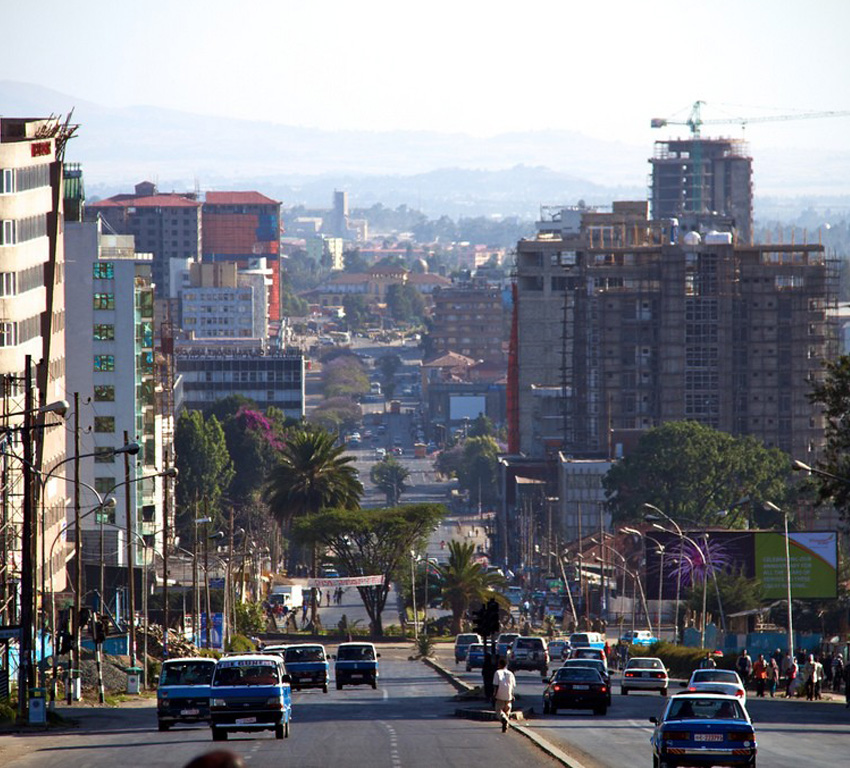 During the Neo-Imperialism era in the late 19th and early 20th centuries, as the Europeans proceeded on their journey for the “Conquest of Africa”; they never anticipated that they would face defeat at the hands of an African country. However, even after spreading their claws of control to cover over 90% of the continent by 1914, the European powers were compelled by Ethiopia to retreat to the coastal region. But, this was not the first time a foreign power was blocked in its attempt to tame the ‘Horn of Africa’. Way back in 1896, Italy too, was defeated twice in its endeavour of invading the country.

Ethiopia is one of the oldest countries of the world (established in around 980 BC) and finds mention in the Quran, the Bible, the Iliad and the Odyssey. Earlier called Abyssinia, the word Ethiopia originates from the Greek word ‘aitho’ meaning ‘I burn’ and ‘ops’ meaning ‘face’, which together reads as ‘scorched faces’.

Presently, the official name of Ethiopia is preceded by three big words – Federal Democratic Republic – making Ethiopia a sovereign nation that chooses its representatives to form the government. On May 24, 2015,parliamentary elections were held in Ethiopia in which the ruling Ethiopian People’s Revolutionary Democratic Front (EPRDF) swept a clean majority, winning 500 of the 547 seats. The nation draws its strength from its history of being the only African country to have never been colonised in over 2,000 years. This historical feat speaks volumes about the military strength of the land at that time. Even today, it remains the third most powerful military in Africa and the 42nd in the world.

Presently, the official name of Ethiopia is preceded by three big words – Federal Democratic Republic – making Ethiopia a sovereign nation that chooses its representatives to form the government. On May 24, 2015, parliamentary elections were held in Ethiopia in which the ruling Ethiopian People’s Revolutionary Democratic Front (EPRDF) swept a clean majority, winning 500 of the 547 seats.

If linguistics are to be believed, Ethiopia was the place of settlement of the first Afro-asiatic speaking populations. This linguistic headway can be attributed to the fact that it was from this region that the anatomically modern humans left for the Middle East and other parts of the world. While Amharic is the official language of the country, Arabic holds the crown of being the most widely spoken one, out of the hundreds of Afro-asiatic languages, followed by Oroma, Tigrinya and Somali. There are over 80 ethno-linguistic groups in Ethiopia and English remains the most widely spoken foreign language.

If you ever find yourself roaming on the streets of Ethiopia and hear someone saying that the time is 2 in the evening, do not be surprised. An 8 pm is called 2 in the evening as the Ethiopian day begins at 6 am with sunrise as opposed to 12 am in the rest of the world. Interestingly, Ethiopia is the only country in the world to have 13 months in a year, with the 13th month comprising five or six epagomenal days. The Ethiopian timetable is eight years behind the western timetable. Its New Year falls on September 11 and is called ‘Enkutatash’.

‘Wat’ to eat in Ethiopia!

‘Wat’ is what you would want to eat when in Ethiopia. That was not a spelling error but the name of the national dish of Ethiopia. Wat, a spicy meat stew, is a feast of flavours and is made with chicken, sheep, a host of vegetables and berbere (a mixture of spices such as cumin, nigella, fenugreek, peppers and basil). It is accompanied by its all seasons partner ‘injera’, the traditional bread. One needs a huge appetite for this sourdough-risen delicious flatbread

made of fermented teff flour, as it is 20 inches in diameter. Apart from this, the Ethiopians start their day with a hearty Chechesba, fondly known as Fit-fit, consisting of bread known as ‘kitcha’, which is shredded and stir-fried in Wat, seasoned butter and berbere spice mixture. A sharp contrast from this elaborate dish is ‘Kitfo’, which is simply raw minced beef seasoned with butter. Also, people love to gorge on Ethiopian lentils with sweet potatoes or yams.

In 4th century BC, the Kingdom of Aksum now known as Ethiopia accepted Christianity as its statereligion. The first Hegira (migration of Prophet Muhammad’s companions and relatives) in Islam in around 613 CE also happened in the Christian Kingdom of Aksum, when Prophet Muhammad sent his daughter Ruqayah, along with 80 people in Ethiopia to seek comfort. Hence, apart from Christianity, about 35% of the total population of Ethiopia practices Islam. As per the 2007 National Census, Christians make up about 62.8% of the country’s population, Muslims about 33%, practitioners of traditional faith comprise 2.6%, and other religions about 0.6%.

The seventh largest country in Africa is surrounded by Sudan in the north-west, Eritrea in the north, Djibouti in the east, Somalia in the south-east and South Sudan and Kenya in the south. Despite its harsh weather conditions, Ethiopia remains the most populous landlocked country in the world. Descending from Ethiopia’s highest mountain Ras Dejen (4533 metre) in the north to sand sliding in the Ogaden desert in the south, this country which is largely a plateau, is a place of sharp geographical contrasts and is diagonally cleaved by the Great Rift Valley. Most of the major rivers such as Tekeze, Abay and Sobat flow in the north-west direction because of the slope of the uplands.

The presence of three tectonic plates in the Horn of Africa created a geographical depression known as the Danakil Depression. Dallol, a volcanic explosion crater in this depression is the hottest inhabited settlement in the world. The country is also home to the cold Ethiopian highlands famously called the ‘Roof of Africa’ as they accommodate 80% of Africa’s tallest mountains.

The significance of Addis Ababa

At the heart of the country, lies the largest city and the nation’s capital Addis Ababa. It is the world’s fourth highest capital city and also serves as the headquarters of the African Union and the United Nations Economic Commission for Africa. Addis Ababa, one of the most expensive cities of the African continent is home to Mercato – Africa’s biggest outdoor market.

Thank Ethiopia for that cup of coffee you just had! Rather, thank goat herder Kaldi, whose flock accidently ate the coffee plant and got so excited that they started running restlessly, leading to the “accidental” discovery of one of the most popular beverages of the world. Coffee rides the exports market in Africa with 40% to 60% contribution to export earnings. About a quarter of Africa’s 80 million population relies on the coffee industry. Evidently, the nation is the largest exporter of coffee in the world. Ethiopia has a global reputation of producing some of the best varieties of coffee beans, which are aptly referred as “Black gold”.

In 2007, the Ethiopian government reached an agreement with American coffee giant Starbucks, which enabled Ethiopia to trademark its specialty coffee variants namely Sidamo, Harar and Yirgacheffe as part of the modern intellectual property system. This move was particularly aimed at sharing the benefits of the coffee industry with the poor coffee farmers. In return, Starbucks was freed from paying any royalty in gratis.

Apart from coffee, the tourism sector contributes 5.5% to the Gross Domestic Product. The star of Ethiopia’s tourism sector, however, are the 900-year-old Churches of Lalibela, a United Nations Educational, Scientific and Cultural Organisation World Heritage site. A congregation of 11 churches carved out of a single rock is a place of worship of Ethiopian Orthodox and attracts 80,000 to 100,000 visitors every year. Interestingly, the Ethiopian Constitution denies the right to own land as it considers it to belong only to the “state and the people”. However, one can lease land for a period up to 99 years, and can mortgage or sell the land. Despite this hitch, the construction business in Ethiopia has seen an upturn in the recent years, with focussed investment in public infrastructure and industrial parks, especially the road sector, so much so that Addis Ababa is being termed as the ‘Dubai of Africa.’ According to a report by the Ethiopian Roads Authority, over nine billion Birr (currency of Ethiopia) equivalent to one-fifth of the total budget allocated for the current fiscal year, has been spent for the construction of roads in the past six months, with 13 new projects in the pipeline for the year 2017. This boom in road-construction happened when the government in 2016 prioritised the transportation sector. Subsequently, the country’s road network increased from 54,000 kilometre to 1, 13,000 km.

Ethiopia may emerge as the ‘Water tower of Africa’ in the coming years as its untapped large water resources have the potential to become ‘White oil’, with 14 major rivers pouring off the high tableland, including the Nile. Seven major dams for hydroelectricity production and irrigation have been completed till date. The Grand Ethiopian Renaissance Dam project, started in 2011 is contemplated to be the largest dam in the African continent, producing 6 Gigawatt (GW) of energy on completion. Other sectors such as telecommunication services, large mineral resources and unexplored renewable assets such as solar energy can change the face of the current economic scenario of the country.

A bright future ahead

According to the International Monetary Fund, Ethiopia was one of the fastest growing economies in the world, registering over 10% economic growth from 2004 through 2009. It was the fastest growing non-oil-dependent African economy in the year 2007 and 2008. In 2015, Ethiopia had witnessed rapid economic growth with real Gross Domestic Product growth averaging between 10.9% between 2004 and 2009. As per the World Bank report, poverty in Ethiopia declined from 44% to 29.6% during 2000-2011. These statistics are not merely numbers, but an indication that this fierce nation is on a trajectory of growth and is in no mood to look back, a sentiment validated by the country’s national anthem which goes, “March forward, Dear Mother Ethiopia…”