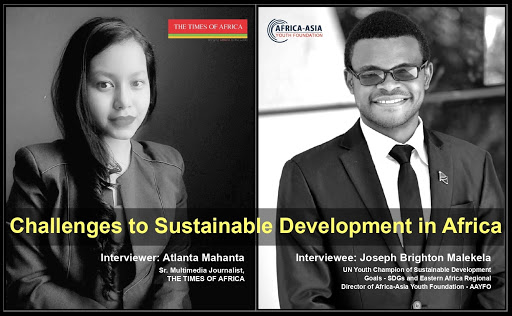 Q1. What are some of the Challenges to Sustainable Development in Africa?

A1. First, let’s understand this concept of sustainable development. This concept means having various development initiatives in a country without compromising the ability of the future generation to get development. The Sustainable Development Goals (SDGs) Agenda is the commitment of the United Nations adopted in 2015 to ensure that, by 2030 we realize the sustainable progress to 17 identified world challenges. And why did the UN come up with this issue of sustainable development? The previous Millennium Development Goals (MDGs) which was adopted in 2000, was insisting on economic development so as to eradicate poverty and improve the livelihood of people. It emphasized nations and states to ensure that they take different initiatives such as increasing investment, investing in industrial development and other initiatives which will revamp their economies and improve lives. This agenda had great success as many countries increased production, international trade of local products, and improved other aspects of people’s life. The only challenge with MDGs was sustainability, due to the fact that strategies employed and resources used such as energy were not sustainable to the extent of creating a serious problem in the coming years. For instance, in fishing industries, the use of small nets traps very small fishes which in turn, after some years, there will be a shortage of fishes in different parts of the world. Also, the use of non-renewable energy like petroleum in motor vehicles and coal in industries causes a serious challenge of greenhouse gasses immersions and destruction of our very valuable ozone layer. So coming to the concept of sustainability, they meant that the development process should be handled in a way which won’t compromise the hope of the future generation. I think all of these issues of resource, when we speak about sustainable development, for instance, as a developing country, it doesn’t mean we just think of industrialization, it is more than upgrading technology and other facilities. In Africa, the major challenge to sustainable development is energy. The accessibility of renewable and clean energy such as gas, wind energy, water-electricity is quite difficult compared to non-renewable energy such as fuel and coal in industries. Another challenge is an investment in youths. Although there has been a drastic change, there should be more investment and inclusion of youths in the development decision-making process. Bringing youths on decision-making processes will ensure that they understand what is going on, what the development direction is taken by the country and what is supposed to be done when they take over leading the countries. I understand there are different initiatives and approaches to youth inclusion in African countries, but if we don’t have enough young people in the Decision-Making we won’t be sure of the future. Other general problems are network services, infrastructure and climatic conditions

Q2. What role does China play in Africa’s economic development?

A2. Well, as you know, China is one of the very powerful economies in the world, so most of the African countries are financed by China in different development projects. Aspects of materials for constructions, technology and capital from China are very helpful in developing countries. However, I think this support should be for the purpose of stabilizing the African economy, getting experience in advanced technology from some genuine sources and developing local capacity. I believe that Africa is dependent on China in many sectors but also continues to learn on how China is doing. When our country depends on raw materials and cheap export and technology from China, other countries like India also have business opportunities in Africa. But in this process, there should be a certain percentage of local workers in Chinese-financed projects who are learning how things are happening so that they won’t be dependent forever.

Q3. Is the whole continent equally progressing or are only a few countries?  I would like to highlight another point, if we take an example of South Africa, which is more developed compared to other countries, how mainstream media is presenting data more collectively and generalising the continent. What about other countries than S. Africa?

A3: So what do we know when we say progress? I think we are talking about the whole development, and it will help each individual country. I mean, how these countries are rich, they have good leaders and financial support with urban planning projects. But how did the people have a social contract and support the local business and the trade between countries? So I think you are speaking about the whole economy for the country. For the past 10 years, I think it’s best to make sure that things seem to move once was typical to one another in terms of development. I don’t have specific data for each country that specifically is moving forward, but most of these countries are progressing to make sure that in terms of human development, like in education, women empowerment, health sectors etc are improved. Some countries which have good and visionary leadership are becoming an example for other countries in Africa. Countries like Kenya, Tanzania and Nigeria have good leaders who are leading to have promising progress of development. And I believe that if these countries will proceed to strong selfless leadership, we shall see more development processes in Africa and it will be promising progress.

Q4. How do we improve the quality of growth and create jobs in Africa?

A4. The problem of unemployment is everywhere; it is the world’s challenge. The government can create different initiatives to create jobs apart from the informal sector, which employs a lot of people, especially young people in Africa. The kind of education system we have should hone youth skills and make students more capable. It should make them independent. Also, their competence, knowledge and education that youths have obtained in informal education should be utilized to create jobs for themselves. In the private sector, employers are more than 60-70% in some countries compared to the government sector. The government should just supervise, creating an enabling environment by reducing barriers and enacting favourable laws so that young people can get something from themselves.

A5. Yes, we shall take chances and change for the better. We may have a very promising and sustainable project in the country and you can’t see any reason not to finance it. But then they say, it depends to get support from the World Bank, the international donors, and sometimes, in the end, we fail to get it. So for me, I think that the approach needs to be changed towards developing projects, sustainable development and sustainable products. Leadership becomes flexible if you can mobilize effectively the citizens to feel part of the sustainable project, then you can mobilize local resources from willing contributions, taxes and other local sources.  So, we’ll see how to innovate. I see a very convenient way of bringing people closer to this project and feel that they are part of it. They can sometimes support the implementation, and not only landing on the support from the outside, I mean, international funding. So for me, I think that will be very important to initiate projects under our local capacity. That will be limited to promising simultaneous projects, which are very good. So there must be a system of responsible management. I mean, there must be selfless and ethical leadership and governance, especially on how we spent these funds that have been obtained from, for the development project, from different donors and outsiders. So it should be available to proper management and transparency and accountability to people on issues of how to handle these funds. I think if we improve the issue of leadership, especially ethical leadership to erase corruption and the misuse of power. Emission of job profiles and works for people, and also equally take the approach of creating sustainable products. It will be very promising. And lastly, but not least if we involve young people who will be the new voice with different agenda and set new propaganda. So if we bring them in this development, they might succeed but if not, they will never know where we fail. We must make sure that young people are there for the implementation of these sustainable projects. We will be sure that the country will be moving and to be achieving sustainable goals.