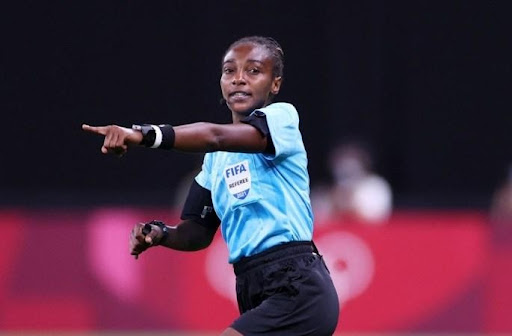 Salima Mukansanga, the 33-year-old Rwandan is set to make history by becoming the first-ever woman referee in the men’s tournament of AFCON 2021 (Africa Cup of Nations). Her debut officiating match on Monday will give her the status that has been devoid of women in most African countries, especially in a game that resonates with male domination.

Salima Mukansanga has presided over the 2020 Tokyo Olympics, FIFA Women’s World Cup, Confederation of African Football Women Champion League, and Africa Women’s Cup of Nations. Besides these features in her cap, she also has the laurel of umpiring for top men’s teams in Rwanda, her home country.

This well-respected referee has earned her impressive status through the past professional game officiating that makes up for a resume perfect list. She is often likened to Pierluigi Collina, a former Italian referee for her temperament and unbiased referee skills. Collins was even awarded the FIFA’s ‘Best Referee of the Year ” title for six years consecutively for his performance and is considered one of the best football referees of all time.

CAF released a total of 63 match officials list who will be officiating at the AFCON men’s tournament and Ms. Mukansanga is on 4 of the four women in the matches list. The other women on the officiating list are Morocco’s Fatiha Jermoumi, Bouchra Karboubi, and Cameroon’s Carine Atemzabong. However, none of these latter women would referee any of the AFCON men’s matches.

Ms. Mukansanga has taken charge of various matches in Rwanda since 2018 and all that hard work has finally paid off making her the first-ever woman to referee the men’s tournament of AFCON 2021.