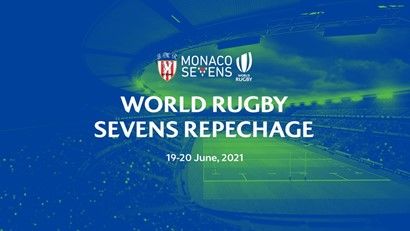 Teams competing in Monaco for the final places available at the Tokyo 2020 Olympic Games will be boosted by confirmation that fans will be able to attend the event on 19-20 June.
Match schedule announced for final Olympic qualification event towards Tokyo 2020Stade Louis II in Monaco to host up to 5,000 rugby fans on 19-20 June, 2021Tickets start at 10 euros per day and go on sale today at Monaco-rugby.comThe revised format for the men’s competition will see two games played on Friday 18 June to maintain player welfare guidelines for World Rugby sevens tournaments media and photographers interested in covering the event can request the accreditation by emailing mbergesi@gouv.mc
Organisers have confirmed that 5,000 fans will be able to watch all the action from the second and third days of competition inside the iconic Stade Louis II, subject to maintenance of the current covid environment. Fans will be required to wear face masks and respect social distancing.
The boost comes on the day that World Rugby confirmed the match schedule for the competition which will feature 12 women’s and 10 men’s teams all vying to achieve the ultimate prize of securing the remaining two women’s and one men’s team places for Olympic rugby sevens in Tokyo, which will take place on 26-31 July 2021 at Tokyo Stadium.
The women’s competition will feature Argentina, Colombia, France, Hong Kong, Jamaica, Kazakhstan, Madagascar, Mexico, Papua New Guinea, Russia, Samoa and Tunisia. The men’s tournament will involve Chile, France, Hong Kong, Ireland, Jamaica, Mexico, Samoa, Tonga, Uganda and Zimbabwe.
View World Rugby Sevens Repechage pools and match schedule >> https://bit.ly/2QYS1b0
While the action kicks off on Friday 18 June at 18:00 local time with Zimbabwe versus Mexico being the first of two men’s matches that evening, fans are invited to join the festivities in the stadium for a packed programme of men’s and women’s matches on day two and three culminating in the two women’s finals and the one men’s final on Sunday evening.
The match schedule has been developed with player welfare at heart. No team will have more than three games in each day, resulting in the two games being organised on Friday evening, accommodating the reduction to 10 teams in the men’s competition. Due to late kick-off times, the two Friday games will be played behind closed doors.
World Rugby Chief Executive Alan Gilpin said: “With Tokyo 2020 less than three months away, the rugby family is looking forward to what promises to be a special sevens tournament that personifies the togetherness, camaraderie and optimism that characterises these remarkable Olympic Games.
“The Monaco repechage is also symbolic in its own way – a reflection and celebration of sevens international re-emergence from the unprecedented challenges that society and sportspeople have faced. I know that these players are excited to be representing their nations with the opportunity of qualification for the pinnacle of sevens – the Olympic Games.
“It will be extra special that they get to showcase their skills in front of fans. I would like to thank their Serene Highnesses and the Monegasque Rugby Union for embracing our event and providing the players with the perfect platform to challenge for Tokyo 2020 qualification.”
TICKETING
Online ticketing for the World Rugby Sevens Repechage will open this Friday 28 May at www.Monaco-rugby.com. From 8 June, Rugby fans will also be able to buy tickets directly in Monaco at the ticket offices located at the Stade Louis II’s entrance. (see opening times below)
Tuesday to Friday 10:00 – 14:00 and 16:00 – 19:00Saturday 12 June: 10:00 – 13:00Saturday 19 June: 08.30 – 16:00Sunday 20 June: 10:00 – 16:00
Tickets will start at 10€ / fan/day with a discounted price of 5€ available for Monaco students and FFR licence holders. Fan travelling to Monaco to watch the action will need to present a negative PCR test, less than 72 hours old, upon their entrance in the Monaco Principality (except for French residents living in the 06 and 83 departments). Fans can find all the measures put in place in the Monaco Principality on the following link: www.covid19.mc
For any ticketing-related enquiries, please contact billetterie@monaco-rugby.com
MEDIA INFORMATION
Media and photographers interested in covering the event in Monaco can request the accreditation by emailing Margot Bergesi at mbergesi@gouv.mc.
No contact with players will be allowed during the Tournament, except for certain approved media who will be allowed access to the mixed zone (second stand A) with confirmation of a negative PCR test taken no earlier than 72 hours prior to the event.