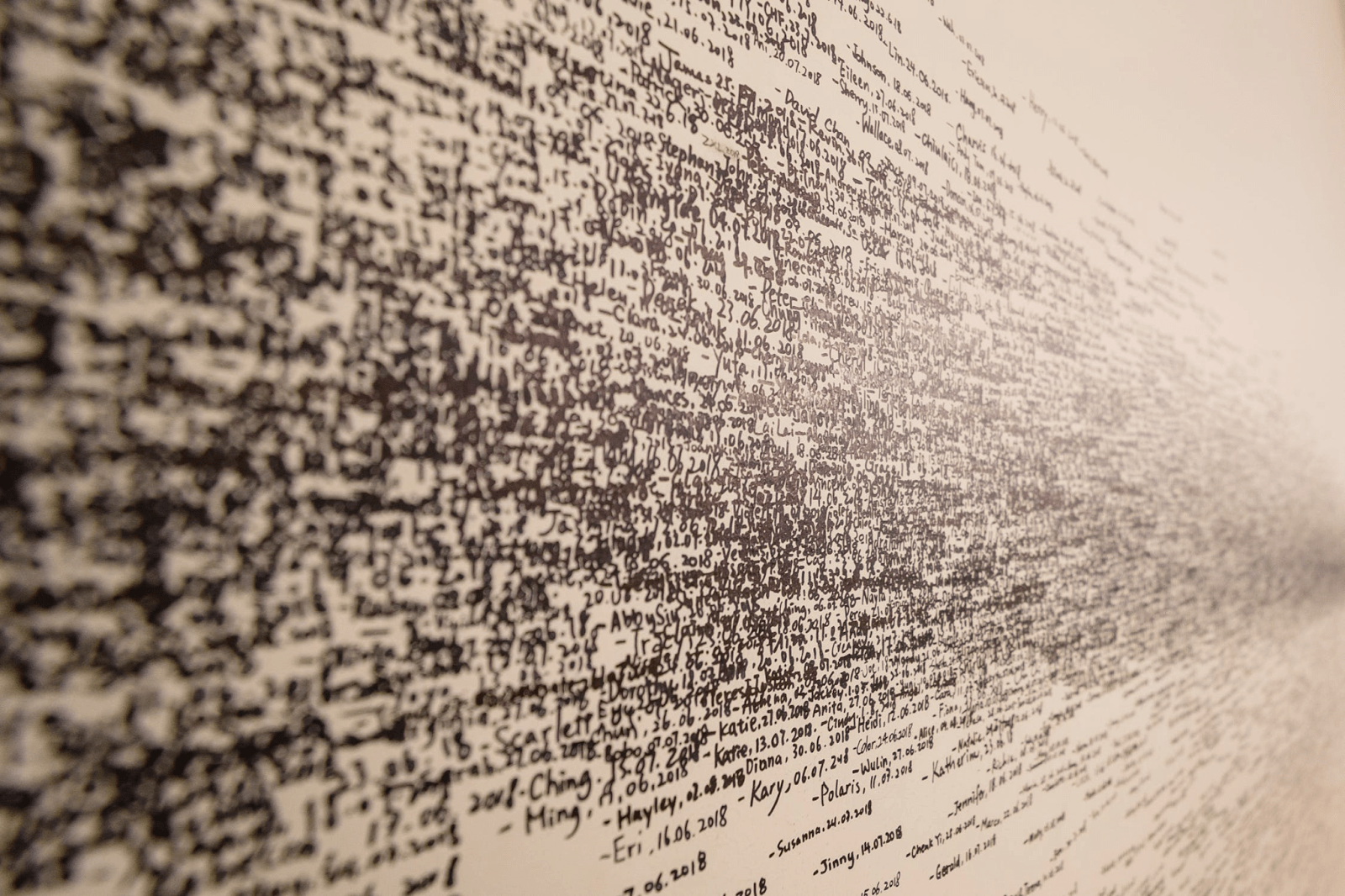 “Sometimes, the simple act of speaking in your mother tongue can be a revolutionary gesture” –Ngugi wa Thiong’o

Good intentions lead to positive results. There are approximately 1500 to 2000 different African languages on the continent. It is imperative that we explore foreign languages with the advent of globalization. But it should not compel us to strangle our own linguistic roots. Languages are not only a communication medium but also powerful instruments to preserve our culture and heritage. When a language dies, a significant part of the culture dies with it. Because of the level of globalization, the indigenous people have either been forced to abandon their native language or end up losing it. It’s estimated that at least half of the 6000+ languages spoken on Earth are in danger of extinction.

“Language is the fulcrum and axis of any culture and identity of any individual. It is the definition of humankind and what surrounds them. The preservation of culture is passed on across generations by word of mouth, through language. Which is why the loss of any language no matter how many people speak it, should be a cause for concern. The world and the diversity as we know it has been made possible because of a mix of cultures and languages,” said Harry Kiema from the University of Nairobi Department of Linguistics & Languages.

To prevent languages from becoming extinct, the UN introduced the International Mother Language Day in 1999. It is celebrated every year on February 21.

Is it enough? Let’s begin with the preservation of language, which is the name given to every effort to prevent a language becoming forgotten, in other words, dead. You may wonder “how can a language be forgotten if you live in a one-language country?’ But most of the 7,100 languages are spoken—they are not written. In general, parents in small communities teach these languages. New members in these communities keep the speech alive, just as their parents did, by passing it to their children. Such languages may be forgotten because every person leaving the community is equal to one less speaker.

Despite years of extinction, a language spoken in today’s fast changing world is relatively easy to die. Indeed, linguists estimate that over 250,000 languages are already dead, and a language dies on average every 2 weeks. Not only are spoken languages at risk but some famous languages also lose their influence. Examples include Latin, Greek, Arabic, and even French. Studies indicate that, while they have written form and well-developed literature, several more global languages like English and Spanish dominate those languages.

Why does it Matter? Why do we need to care and why should we try to save the languages? You may think it would be much easier for all if humanity only had one language but what about cultural identity? As far as languages are concerned, the cultural elements involved cannot be overlooked. Culture makes us who we are and language is one of the numerous forms that culture has developed, if not anything else. It can be regarded as an instrument for assessing and shaping our own culture. Nothing but language itself has the ability and the very same effect can also be observed for culture if it is changed in any way. This is why language is directly linked with human relationships, traditions, customs and even cooking. Once a language has been disregarded, all these will be forgotten along with history and more.

There are different organizations for linguistic protection and projects for language conservation. An example is the ELP (Endangered LanguageProject), which provides detailed international maps in every country of endangered languages. Most of such projects are aimed at collecting data and, if possible, providing education. Some of them try to preserve languages spoken through documents.

You can donate or participate in projects to help these organizations. If you cannot do any of them, then it is sufficient to be aware that language is important and that it is also connected to culture.

There are other ways of preserving a language. For oral languages, it could be important to record the language when it is passed on to younger generations. Writing about those languages (e.g. where you speak them) can also contribute to creating a historical account of almost extinct languages.

Written languages can also possibly be assimilated or become solectic in other languages. Assimilation is due to too many foreign language influences, and many languages are in danger of assimilation in our globalized world because of an enormous amount of English lending words. On the other hand, solecism refers to grammar misdemeanours. It is because some grammatical errors are so common that they seem natural. Unfortunately, even the providers of language services can make these mistakes and produce full translations of grammatical and borrowed words. Fortunately, Protranslate with its expert team of translators and prudent proofreaders pays the utmost attention to the correct use of the language.

It’s very important to practice native languages. When the original language is lost, family and other relationships may be weakened. Encouraging the use of the child’s native language skill is an excellent way to ensure their participation in the community. Individuals in socializing will become more comfortable. People need continuous learning. Many non-English speakers function at an intellectual level below their age when they only use English. This will probably lead to the academic failure of the interruption of intellectual development. This is particularly true of parents and children when they talk to one another in their own dialect, as they try to relate to each other, they speak at their actual intelligence level of the family. As a result, students who learn English and maintain their mother tongue have better grades and achievements in later years. Better jobs for people fluent in English and another language are available in the country and abroad.

Afro-Asiatic languages, also known as Afrasian languages, were formerly Hamito-Semitic, Semito-Hamitic, or Erythraean languages, and are spoken in northern Africa, the Arabian Peninsula, and some islands and surrounding areas in Western Asia. Approximately 250 million people speak 250 Afro-Asian languages today. The number of speakers per language ranges from around 150 million in Arabic to only a few hundred in some Cushitic and Chadic languages.

Following the classification of African languages proposed by American linguist Joseph H. Greenberg in 1955–63, the term Afro-Asiatic gained widespread acceptance. Scholars in the former Soviet Union prefer the term “Afrasian” to describe these languages. Although it is still used occasionally, the term Hamito-Semitic (or Semito-Hamitic) is largely considered obsolete; many scholars reject it because it is linguistically incorrect—there is no linguistic entity “Hamitic” to be contrasted to “Semitic” as a whole. Other names, such as Erythraean and Lisramic, have received little traction.

The languages belonging to the Afro-Asiatic family are subdivided into six branches:

Below is a list of the top languages within each branch of the Afro-Asiatic language family.

Afro-Asian language speakers were among the first to establish writing systems in human history. Some Afro-Asian languages, such as Akkadian and Eblaite, are only known from records dating back over 5,000 years. Some have vanished but left traces in the form of inscriptions; for example, Old Libyan can be found in inscriptions dating back to 139 BCE. Others, such as the Guanche language of the Canary Islands, are listed in documents transcribed in European languages. Coptic is the third case; it dates back to antiquity and was spoken until the 16th or 17th century CE, but it is now only expressed by liturgical phrases used by the Coptic Orthodox Church.

Within the Afro-Asiatic phylum, linguists identify six divisions: Amazigh (Berber), Chadic, Cushitic, Egyptian, Omotic, and Semitic. These divisions vary in terms of both the number of languages and the degree of genetic relationship as determined by mutually inherited vocabulary and grammatical features, both of which are discussed in greater depth further down. The degree of kinship between divisions and subdivisions tends to be much less than that between Indo-European branches. None of the current proposals for the relationship between divisions within the phylum, however, can be considered definitive. There is no consensus on the subdivisions of the six main divisions, either. Since there isn’t enough evidence to support subclassification, some writers still follow Greenberg and recognize five coordinate divisions within Afro-Asiatic (or six, including Omotic in a separate family). Others may prefer a set of binary subdivisions, such as those shown in the genealogy below.

Scholars have searched for a special relationship between Afro-Asiatic and Indo-European languages because of certain similarities to Indo-European languages. Some scholars go so far as to include the Uralic, Altaic, Kartvelian, and Dravidian language groups in their kinship hypothesis. Other African and European linguistic units, such as Niger-Congo, Nilo-Saharan, and Basque, have attempted to connect Afro-Asiatic. However, if there was a shared ancestor for these languages, it existed so long ago that applying sound comparative methods to modern languages to test this theory is nearly impossible.

The Afro-Asiatic language family, formerly known as Hamito-Semitic, is the largest in northern Africa. It is spoken in North Africa, the Arabian Peninsula, and the Middle East, with a total population of more than 300 million speakers. Since Arabic, Hebrew, Coptic, and Syriac are the official languages of Islam, Judaism, and two Christian religions, the language family reaches several millions of people in addition to native speakers.

The Afro-Asian language family is made up of 375 genetically related languages (Ethnologue) that evolved from a single ancestral language that existed in the 6th–8th millennia BC. While most scholars agree that the ancestral language originated in Northeast Africa, there is no consensus about where the ancestral Proto-Afro-Asiatic speakers lived. Ethiopia has been suggested as the original homeland, although the western Red Sea coast and the Sahara have also been suggested.