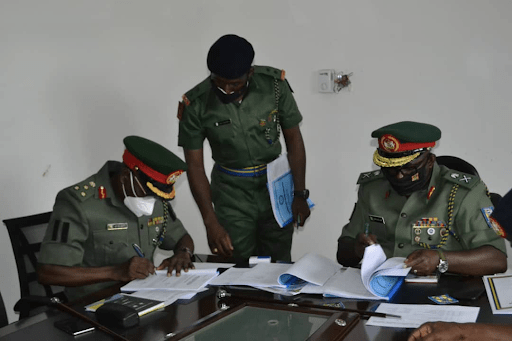 The new Commandant, Nigerian Army School of Supply and Transport (NASST) Brigadier General Matthew Abiodun Bolarinwa has today 22 July 2020 took over the mantle of leadership of the School from his predecessor Major General Bolaji Nicodemus Salami. Until his appointment as the Commandant, he was the Deputy Director Capital Procurement at the Defence Space Agency (DSA) Abuja.

According to the Acting Assistant Director of Army Public Relations Nigerian Army School of Supply and transport, TAYO OLUWAFEMI Lieutenant on 22 July 2020 said in a Press release sent to AFRICA SECURITY INVESTIGATION, during the ceremony, the past Commandant Major General Salami has enjoined the Staff Officers, Students and Soldiers of the School to extend their hands of fellowship and support to his Successor while thanking them for their steadfastness and dedication to duty. He also called on student officers and soldiers of different courses to redouble their efforts in their studies in order to come out in flying colours.

Also, the Outgoing Chief Trainer of the school in his remarks said, “I am not leaving the Nigerian Army, I am leaving to assumed Command as the Corps Commander of Supply and Transport”. He, therefore, urged the staff officers to maintain a good relationship with the new Commandant and also expressed optimism that he has no iota of doubt in the capabilities of the incoming Commandant in handling the affairs of the prestigious School to an enviable height.

The new Commandant while given his remarks wished the Outgoing Commandant a successful leadership as he takes over the command of the Nigerian Army Corps of Supply and Transport and also promised not to relent in his achievement during his tenure in the school. The highlight of the event was an endorsement of handing and taking note, decoration of new commandant with school insignia as well as inspection of Quarter Guard by the incoming Commandant and Outgoing Commandant.