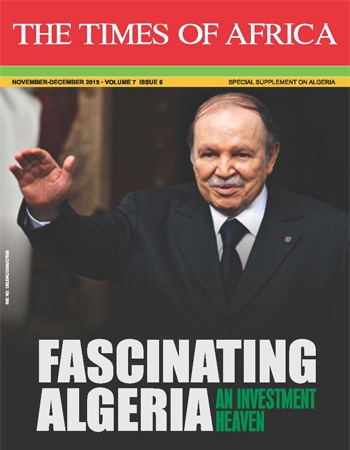 THE TIMES OF AFRICA, on the occasion of 3rd India Africa Forum Summit produced a special supplement on Algeria. This country is the leading natural gas producer in Africa, the second largest natural gas supplier to Europe outside of the region and one of the top three oil producers in Africa. Conscious of the need to take part in the fight against the climatic change, Algeria has the concern of the sustainable development and implements from her side. Algeria pursues an active role within the global mobilization for environmental protection and the promotion of sustainable development. Moreover, Agriculture has become an important contributor to Algeria’s socio-economic development. After hydrocarbons, agriculture is the country’s second-largest GDP contributor, at around 10%, with 25% of the population engaged in the sector. Self-sufficiency with regard to fruit, vegetables and meat has been attained while cereal, milk production and fishing have been prolonged. Algeria is also switching progressively from a net importer of agricultural goods into an exporting economy by concentrating on the promotion of those particular goods that have a comparative advantage, such as dates, wine and olives.