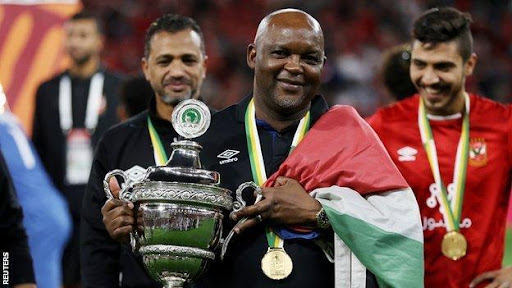 After talks on tenure extension, Al Ahly sporting club coach, Pitso Mosimane has agreed to extend his stay as the coach with the Egyptian giants until the year 2024.

Pitso Mosimane is a 57-year-old coach and South African football manager, who has led Cairo’s side in the African Champions League title, serving twice since his joining the team in 2020.

The South African coach and current manager of Al Ahly, proudly boasts of two consecutive third-place finishes in the football world cup, which includes the 2021 edition.

Pitso Mosimane had previously coached South Africa starting 2010 to the year 2012 and at Al Ahly is his first managerial position acquired outside of his homeland, South Africa. He was recently named as the best African Club coach of the year and since then he has not been short of success. As Al Ahly, he has led the Egypt team to win the Egyptian Cup and the Caf Super Cup, which is the league title.

The ten times African champions announced in their statement that they were delighted to extend the contract of Pitso Mosimane and his assistants with the club for two more years. With this contract extension announcement, Al Ahly put an end to all the speculations that were doing the round during the previous period.