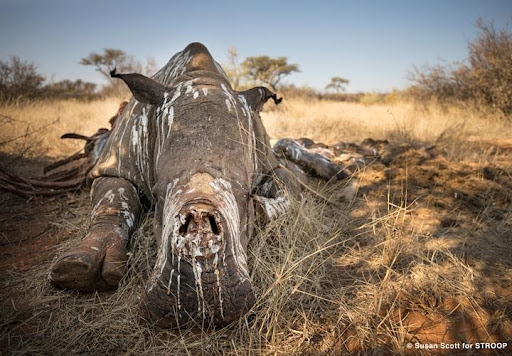 After a pause in Rhino killings in South Africa during the Covid-19 pandemic, the country witnessed 24 killings during the first two weeks of December. After the incident, the Environment Ministry of South Africa stated that in December, carcasses were found in the country’s four provinces and seven arrests were made in response.

A total of seven Rhinos were found dead in the Kruger National Park, seven Rhinos in Mpumalanga, and six Rhinos in KwaZulu-Natal. In Western Cape four Rhinos were shot dead by the poachers, including one pregnant female and a fifth Rhino is being treated for a gunshot wound.

South Africa witnessed 394 killings alone, South Africa, in the year 2020 in comparison to the staggering 594 Rhino poaching a year before. A former scientific officer of the International Union for Conservation of Nature’s specialist group, Richard Emslie said that poverty in the region is driving the killings, where people in South Africa are recruited as poachers to hunt in the park.

He further stated that “One of the challenges is to economically empower people living in these rural communities … not just thinking in terms of hard law enforcement and anti-poaching in the parks.”

The new Omicron variant of coronavirus has added fuel to the existing condition by hitting the tourism industry of South Africa and causing a spur in the killings.

Experts say that the increase in Rhino killings is a common trend during Christmas and New Year when criminal gangs in China and Vietnam become active for horns.