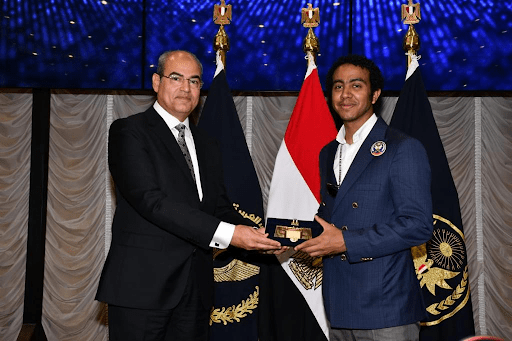 The Nasser Fellowship for International Leadership Second Cohort -themed “South-South Cooperation”- is organized by the Ministry of Youth and Sports -chaired by Dr Ashraf Sobhi- in cooperation with the National Training Academy, the Egyptian Ministry of Foreign Affairs and other national institutions, under the auspices of His Excellency President of the Arab Republic of Egypt/Abdel Fattah El-Sisi. It is scheduled to last until mid-June 2021. The Nasser Program hosts distinguished young leaders from Asia, Africa and Latin America.

The 5th day of the Fellowship Program included a visit to the Police Academy located in the Fifth Settlement, new Cairo. The participating delegations were accompanied by Hassan Ghazali, General Coordinator of the Nasser Fellowship, and some officials from the Ministry of Youth and Sports. Upon their arrival, they were received by Major General Dr Ahmed Ibrahim, Assistant Minister of the Interior and Head of the Police Academy. He gave them a tour of the Police Academy, while explaining the Ministry of Interior’s strategy aimed at strengthening cooperation and building bridges of communication with different institutions and bodies from all over the world.

Major General Dr Ahmed Ibrahim, at the beginning of his statement, welcomed the delegations participating in the “Nasser International Leadership” Fellowship, conveying to them the greetings of Major General Mahmoud Tawfiq, Minister of Interior. He also expressed the Minister’s keen interest in this visit, which is considered an embodiment of the existing cooperation between the Ministries of Interior and Youth and Sports in training youth cadres from various countries of the world. This in turn contributes to strengthening cooperation frameworks between Egypt and the three continents represented in this fellowship.

The “Nasser” fellows, during the visit, inspected the Police Academy’s facilities and installations, and learned about its capacities in specialized security training, at the regional and international levels. They also paid a visit to the General Administration for Training Security and Guard Dogs, the Police Academy Cavalry, in addition to the Faculty of PostGraduate Studies, and the Police Research Center concerned with training security cadres from friendly African and foreign countries.

The “Nasser” fellows also visited some training and educational facilities, such as the self-defence training area and the tactical village. They also watched the Police Academy students showing their skill set in shooting, as well as dismantling and assembling weapons. They were also introduced to the most prominent security training methods based on modern technologies to enhance the students’ skills.

At the end of yesterday’s program, the “Nasser” fellows went to Zawya Cinema, Downtown, to watch “The Land”. It is an Egyptian drama film directed by the great Youssef Chahine. Director Yousry Nasrallah, producer Gabi Khoury, and scriptwriter Sayed Fouad, President of the African Film Festival, were also present.

After the film screening, the “Nasser” participants engaged in a discussion with director Yousry Nasrallah. They talked about the film, its story and its message, and they all praised the great director Youssef Chahine for his amazing work on the film. They then took a group photo with the guests in an atmosphere filled with joy and admiration.

Hassan Ghazali, General Coordinator of the Nasser Fellowship, pointed out that the organized visit to the Police Academy came within the framework of the Youth and Sports Ministry’s role in introducing young people to the efforts by State bodies to prepare and qualify youth cadres based on the latest technologies and universal methods. The Nasser International Leadership Fellowship aims to popularize Egypt’s longstanding experience in national institution-building, create a new generation of young transformational leaders -whose vision aligns with the directions of the Egyptian presidency- in various countries, and connect the most influential young leaders through the necessary training, skills enhancement and application of strategic visions, added Ghazali.

He also explained that the Nasser Fellowship Second Edition had extended to include youth leaders from Asia and Latin America in addition to Africa. 100 young leaders from the three continents were selected to participate in the Nasser International Fellowship. The “Nasser” target group consists of decision-makers from the public sector, AUYVC Graduates, executive leaders from the private sector, civil society actors, heads of national youth councils, members of local councils, young party leaders, University faculty members, researchers in strategic and intellectual research centres, members of trade unions, journalists and media professionals, and social entrepreneurs.

The Nasser Leadership Fellowship -1st Cohort was launched in June 2019 under the auspices of Prime Minister Dr Mostafa Madbouly, targeting young African executive leaders from different professional disciplines within their own communities, with the objective of popularizing Egypt’s development experience in institution/national character building.

The Nasser Fellowship for International Leadership builds on Egypt’s ongoing efforts -following its chairmanship of the African Union for the year 2019- to strengthen the African youth role by providing them with all forms of support, habilitation and training, in addition to empowering them to occupy leadership positions, in order to capitalize on their capacities and insights. It is also one of the executive mechanisms of the following: Egypt Vision 2030 -10 principles of the Afro-Asian People’s Solidarity Organization -Africa Agenda 2063 -Sustainable Development Goals 2030 -South – South Cooperation -African Union Roadmap on Harnessing the Demographic Dividend through Investments in Youth -African Youth Charter.