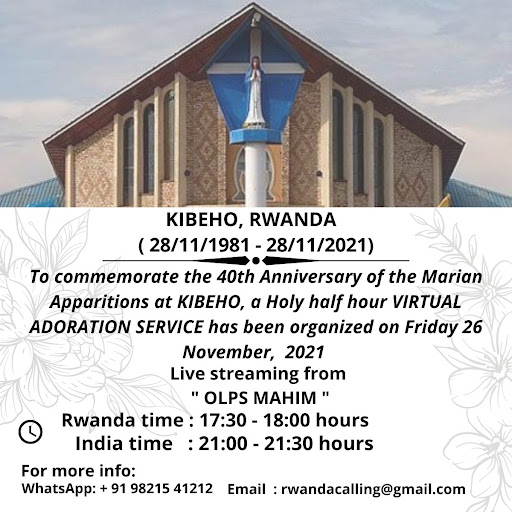 Remarkable Rwanda, home to the mountain gorilla ,  has in recent years, also  become the MICE Hub of the EAC region.

The country is now poised to register a sharp increase in  religious tourism arrivals, to mark the 40 th Anniversary of the Marian Apparitions at KIBEHO on 28 November, 2021.

The Holy Land of Kibeho is situated in the Southern Province of the country and it  is about five hours away from the spotlessly clean capital  city of Kigali.

They were implored to tell the people to mend their evil ways, repent for their wrong doing and forgive one another.  If not ,they were warned,  that Rwanda would become a ” river of blood “

Unfortunately,  no one in the country took these three teenagers seriously and just brushed off their Apparitions as dreams and fantasies.

Thirteen years later, Rwanda witnessed one of the worst genocides in the history of mankind  – the 1994 Genocide against the Tutsi.

Within a short span of just one Hundred days, over one million innocent men, women and children were brutally massacred,  turning the country,  as they were warned , into a ” river of Blood.”

To commemorate the 40 th Anniversary of the Marian Apparitions,  a Virtual Adoration Service will be live streamed from St. Michael’s Church,  Mahim,  where every Wednesday,  before the lockdown  in March 2020, thousands of people from all communities and from all walks of life,  would come to pray and ask the Blessed Virgin  Mary to intercede on their behalf.

Clarence Fernandes,  Chairman,  Rwanda Renaissance remarked: ” We have taken several groups of religious tourists to the Holy Land of Kibeho over the years. The single largest group consisted of as many as forty – six pilgrims,  ten of whom were non – Christians. They all had a wonderful spiritual experience and a few have even come back again on a pilgrimage .”