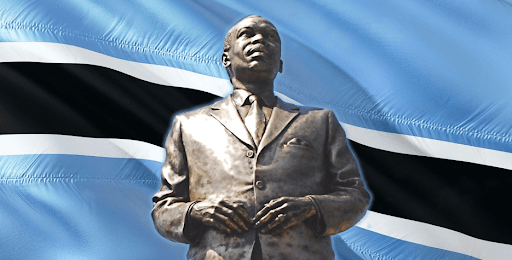 Every year on July 1st, Botswana celebrates Sir Seretse Khama Day. On this day in 1921, the first President of Botswana was born, and this holiday is dedicated to him.

After WWII, Khama went to London to train as a barrister, where he met and married Ruth Williams, a white English commoner. ‘A United Kingdom,’ a 2016 film, dramatized the narrative of Seretse Khama and Ruth Williams. His marriage caused him a lot of problems at home, therefore he was deported in 1951. South Africa’s apartheid regime exerted pressure on Britain to depose Khama as chieftain. A court investigation determined that he was absolutely qualified for the job, but this was kept quiet to satisfy the South Africans.

In 1956, Kahama re-entered Bechuanaland as a private citizen. He formed the Bechuanaland Democratic Party after being granted political freedom, won elections, and led the country to independence, becoming its first President. He held the position until his death in 1980, at the age of 59. He established a multiracial democratic society and is regarded as one of Africa’s greatest political accomplishments. Ian Khama, his son, became Botswana’s fourth president in 2008 and served two terms.