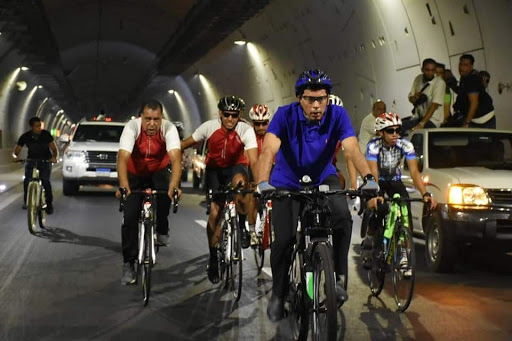 Photo Credit: Dr. Ashraf Sobhi, Minister of Youth and Sports, leads the track of a cycling marathon in the new Port Said Tunnels
Spread the news

Dr. Ashraf Sobhi, Minister of Youth and Sports, accompanied by Major General Adel Al-Ghadban, Governor of Port Said, led the track of a cycling marathon, on Friday morning, with the participation of a group of young men and women, as well as a number of ministerial officials. The marathon started  with a distance of about 8 km in the Port Said Tunnels.

The Minister of Youth and Sports praised the Port Said Tunnels project, which is one of the national development projects taking place in the country under the leadership of President Abdel Fattah al-Sisi, who is driving the country’s engine of development in various sectors. He also pointed out that the ministry was implementing a number of various events regarding these projects with the aim of introducing young people to what is happening on the ground regarding the implementation of major projects, as well as leveraging sport as a tool for the promotion of cities and new projects.

The Minister of Youth and Sports referred to the “Your Bike … Your Health” Initiative implemented by the ministry aimed at providing bicycles for youth and citizens at subsidized prices. Two phases of the initiative have been implemented so far, and the ministry is currently working on launching a new phase to include a larger number of bicycles to meet the demands of young people. In addition, he added that the President’s sponsorship of the initiative was an affirmation of His Excellency’s attention accorded to the dissemination of the culture of the practice of sports within societies, as sport contributes to improving the physical fitness of individuals, and is an economic mode of transport.

The minister revealed that the promotion of sport was one of the main themes that the ministry is targeting in order to develop the sports sector and its agenda regarding sports development to include all groups of society, and to implement programs with the objective of improving the health of citizens through the practice of sports.