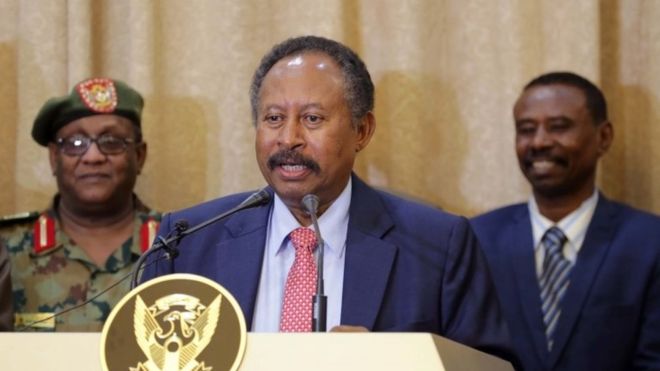 President Trump’s support for the Sudanese revolution, albeit belatedly, was thankfully followed by his appeal to his allies in the region, especially in the Gulf region to follow suit.

The said position in turn naturally raised hopes and increased speculation that the long-awaited decision to delist Sudan from the list of State Sponsors of Terrorism (SST) is just around the corner.

Goodness could only be rewarded with good, world leaders raced to express their jubilation for the manifested will, determination and peacefulness of the Sudanese revolution, which succeeded in ousting the regime whose policies, caused the said sanctions to be enacted in the first place.

Consequentially, it was prima facie compelling on the part of Washington, to revisit the very validity and legitimacy of the remnant sanctions on the post-revolution Sudan, simply premised on the fact that the regime, the US had counteracted for so long and held responsible, has evidently become part of history.

Speaking in from the green marble podium of the United Nations General Assembly’s 74th session, French President Macron has praised the courage of the Sudanese youth in their relentless resistance to the former regime.

Again, during his joint press conference with the Hon’ble Prime Minister Abdallah Hamdok in Paris in November this year, and calling upon the US to delist Sudan from the SST,  Macron has described Sudan’s revolution as a victory of the Sudanese will and peacefulness, adding that the December Revolution shall remain a source of inspiration for the whole world.  Not surprisingly, many nations in different corners of the earth, followed suit and rushed to the streets and picked up the gauntlet.

The request was echoed the same day by the UN Secretary-General Antonio Guterres, who on his part, has encouraged the international community to support Sudan, and added his voice to the calls to remove Sudan from the list.

According to Mr Guterres, “Sudan is a matter of great hope for us.  I believe that what was possible in the dialogue in Sudan, demonstrates that all political conflicts can be solved by dialogue when there is political will for that, and this should be a lesson for everywhere else in the world”.

Likewise and according to Andrew Gilmore, Assistant Secretary-General for Human Rights Council “The Sudanese revolution will go down in history as one of the greatest non-violence mass movements of our generation.”

In retrospect, the decision made early this month by President Trump to extend the US state of emergency on Sudan, albeit being a routine decision since the year 1997, has sent a very confusing message to Sudanese people and caused the majority of them to languish in confusion, rather into muffled anger and frustration. The decision in timing and substance shows that the US continues to manifest regards or heedlessness, to the consecutive regional and international appeals, to cease punishing the helpless population in Sudan, for acts committed by the previous regime.

In fact, the decision poured cold water on the growing expectation in Sudan that the US would shoulder its responsibility, with the rest of the international community, in lending a helping hand to Sudan’s uphill task of economic and political recovery. As a matter of fact, a prosperous and stable Sudan should be the ultimate objective for all international stakeholders.

Against the backdrop of the above, it is necessary to illuminate the fact that Khartoum is still battling spiralling economic crisis or hardship, fuelled, of course, by years of grand corruption and gross economic mismanagement. Alarmingly, this is almost the same economic hardships that animated and fuelled the grassroots protests which ultimately led to Bashir’s downfall.

With exacerbating living conditions, and the scarcity of basic commodities, the public is becoming increasingly impatient to see tangible dividends — the political change, sooner rather than later.  There is a growing tendency, particularly amongst the Sudanese elites, that the very US, reticent to delist Sudan off the SST, is becoming the major stumbling block per se that is not only tending to frustrate their legitimate quest for economic recovery but also, could derail eventually the sound transformation towards democracy.

In other words, it remains a double-edged strategy that by the time the US is ready to re-engage with Sudan, it may turn to be, God forbid, too late.

The Under-Secretary-General for Humanitarian Affairs and Emergency Relief Coordinator Mark Lowcock, just ended a two-day mission to Sudan, the first of its kind since the formation of a transitional government, warning of the deteriorating humanitarian situation for millions of people, particularly in the central and eastern regions, as the country strives to address the effects of erratic weather, multiple disease outbreaks and an economic crisis.

Mr Lowcock further warned that “It is a crucial time for Sudan and we must make sure that people have their most basic needs met.  The international community needs urgently to step up its support.”

By the same token, and with reference to the worsening economic conditions and the scarcity of foreign currency nowadays, and their direct impact on life-saving commodities, the Khartoum daily newspapers reported and featured recently about the desperate acknowledgement made by the Federal Ministry of Health in Khartoum, of its inability to bridge the widening gap, in the importation of life-saving drugs, launching an urgent appeal to the Sovereign Council to that effect to intervene. The Ministry warns at the same time that the spectre of death is increasingly threatening the lives of many patients.

Forging ahead with courageous initiatives and overtures any fair observer, should I acknowledge, in Khartoum since its inception, has ever flinched in engaging the American (shifting) benchmarks, whether ending the persecution of Christians and repression of civil society groups, creating accountability for stolen public funds, or for securing peace agreements to end decades of internal conflicts in the peripheries of the country, to name (but) a few.

However, there should be no mistake, the trajectory of handling such thorny files, is likewise a process not an event, if we may borrow the same words of Ambassador Tibor Nagy. It is a process in which Sudan desperately needs the support and solidarity of the international community.  The US role in this hard way should commence (not conclude) with putting an end to its designation of Sudan as a state sponsor of terrorism.

On the other hand, trying to critically and objectively examine one of the recent articles of John Prendergast, namely, “Don’t Remove Sudan From the Terrorism List”, one could easily come to a conclusion that all the key drivers, Mr Prendergast has enumerated, incriminates the former regime, to validate his call for the continuation of US sanctions.  The article actually fails the litmus test, when applied on the current regime in Khartoum.  Hence, why for God’s sake, should these sanctions be allowed to continue in the first place? It should be noted here that John Prendergast remains one of the most prominent US activist and advocates for the continuation of US sanctions on the former regime.

Sudan remains one of the world’s richest countries, in terms of diversified and untapped natural economic resources, hence, removing the fetters of sanctions would only allow the mobilization of these huge resources that would affect real and fast change on the well-being and prosperity of Sudan’s economy. Sudan shall then immediately cease to be an economic burden, and on the contrary, shall come to the position to make substantial contributions to regional and world economy.

Taking full advantage of these untapped riches and opportunities cannot be attained without, amongst other, foreign direct investment (FDI). Unfortunately, FDI in Sudan shall continue to be a pie in the sky, as long as the current designation is in place. On the other hand, the enforcement of the third party liability on breaking OFAC sanctions has added insult to injury; without thinking, foreign capital and investors are forced to flee to safer destinations. As Thomas Friedman rightly put it, “capital is a coward, not loyal and not patriotic.”

The present political dispensation in Khartoum believes that delisting is necessary to address urgent and deep economic problems, primarily resulting from international isolation and mismanagement. Having said that, continuing to deny Khartoum the access to finance and investment, the US is feared to be putting the cart before the horse, which could inadvertently work, in one way or another, against the very outcome it seeks; an accountable government that is both more democratic and able to fight terrorism.

Worst still, it could open the odds against Sudan, to disintegrate and become yet another failed State in the region, which is by far, the least that Washington or the rest of the international community would prefer to see.

Equally importantly, the different manifestations of US reticence vis-a-vis the delisting reinforces and nourishes an old perception that the US administration still adheres to the policies of changing goalposts and shifting agendas, in other words, that the US policy, contrary to rhetoric, does ostensibly target Sudan as a nation.

Worse still, it may act as a reminiscence of how the first democratic government, in the aftermath of April 1985 uprising, which toppled the military regime of General Jaafar Nimeiri, was ironically rewarded by declaring Sudan at that time ineligible to receive international loans and funds.  They have every right to ask now, is history repeating itself?

The statement of Tibor Nagy that his country no longer has an adversarial relationship with the Sudanese government is both timely and encouraging, however, it holds the United States morally responsible to follow up on its words with actions — helping Sudan to meet its current challenges.

It remains a solid contention that any prompt and resounding success on the part of Khartoum requires creating a congenial environment, in forefront of which comes the delisting of Sudan off the SST, as it would preferably cut short and facilitate Khartoum’s efforts to achieve the desired goals and not necessarily the other way round.

Personally, I feel that these concerns, tacitly embedded in the tone of the questions raised by Congresswoman Karen Bass to US Assistant Secretary of State Tibor Nagy, lamenting in a way or another about the delay in delisting Sudan off the SST, refers to the sacrifices made to that end.

Last but not least, the people of Sudan do set great hopes on the forthcoming visit of the Hon’ble Prime Minister Hamdok’s first official visit to Washington, where he would hopefully conclude some understandings, with the American Administration, to ways and timeframes on how to accelerate the process of delisting the country from the SST. Which also takes into account the size and dimension of the uphill challenges that Sudan is poised to face in terms of security, stability and territorial integrity, as has been explicitly stated by the UN’s Under-Secretary-General for Humanitarian Affairs.