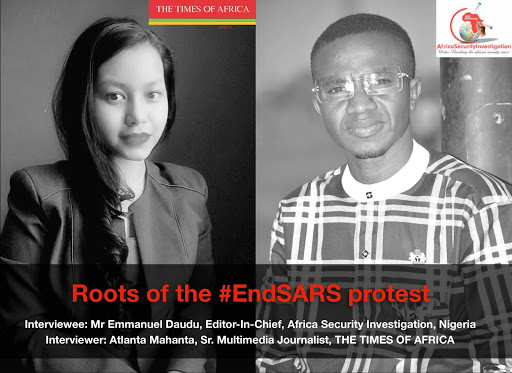 Q. Nigeria is not a failed country, but it has not delivered democracy. The promises of a return to democracy in 1999 have not been kept. Nigerians are yet to feel truly part of the decision-making process in their own country, with elites and securocrats still largely in charge. The “ENDSars” protests are a symptom of a larger problem. How do you assess the outcome?

A. The Nigerian story is that of multiple thoughts and opinions. The part of the divide in which a person finds himself/herself determines his?/ her views. Since the return of democracy in Nigeria, the majority of the citizens have been perpetually shot out of government and its benefits. This could be seen in different sectors ranging from politics, economy, education, infrastructure and so on.

The watchdog of every society which is journalism has been gagged. The people are kept out of government activities with the victimization of journalists across the country. In the last Confab held in 2014, many ethnic nationalities, social groups, and other bodies were never represented. Who then speaks for these people?

Today, our elected officials have developed mechanisms to make themselves far from the reach of the ordinary man. How then would the pains of the people get to those in power? Democracy should be a government formed by the majority but in Nigeria, democracy is a government formed by few while the majority remain in the streets ranting endlessly with no hope in sight.

If our government officials reconnect with the ordinary man in the streets the plethora of socio cultural, economic and security challenges would get to the table of those in the corridor of power. If our elected officials fail to deliver on their promises, the people should have a reliable process of voting them out during elections. This is what democracy should be. This is what “#ENDSars” echoes. It’s larger than ending police brutality.

This must be done to save Nigeria from failing woefully.

Q. The Nigerian Army has said that it will repeat the same action it took at the Lekki Toll Gate anywhere in the country if such a situation arises again. Ibrahim Taiwo, Commander of 81 Division of the Nigerian Army, disclosed this while testifying before the judicial panel the Lagos State Government set up to probe the incident. Is this the only way or we can have alternatives?

A.  In honesty, Nigerians are not surprised with the action of the Nigerian Army at the Lekki Toll Gate during the #ENDSars protest. Nigerians would not still be surprised if such action is repeated in any part of the country.

The truth remains that every security apparatus is configured to serve every sitting administration against the wishes and aspirations of the ordinary man in Nigeria. The case of the Army against the people is a microcosm of the larger problems faced in Nigeria. The Army has grown to a point where they can issue such threats publicly because they know that the government of the day is with them against the people. This is the same Army that has failed to protect this country from internal and external attacks but the same Army would always raise arms against the peaceful people of Nigeria. If this is not nipped in the bud, there will come a time when the people will stand against them. True security lies with the people. The Army has an alternative to this use of force.

Q. What is the current situation in Nigeria?

A. The current situation in Nigeria is that of hopelessness, dismay, shattered dreams, shortness of life, joblessness and a host of others. Today in Nigeria people no longer go to their farms without obtaining a permit from the government.  People no longer travel on our roads without the fear of being kidnapped.  Communities no longer go to sleep without recording disheartening attacks.  People graduate from the Universities for years without jobs. Students have to spend extra years in school occasioned by incessant strikes. Our security personnel take bribes from criminals and arrest innocent people.  The government takes loans without any project to point at. This is the current situation of Nigeria. So pathetic indeed.

Q. What can and should the rest of the world do or contribute to help Nigeria in this desperate situation?

A. The problem of Nigeria can only be solved by Nigerians. The rest of the world has very little it can do. This is because Nigeria is a sovereign nation. No country will build our country for us.  In short, it’s the desire of some nations to see Nigeria in ruins. If we don’t love ourselves how do we expect others to love us?  Charity begins at home. The best people can do for you is limited to what you can do for yourself. We understand that international organisations have a duty but the result of their services is proportional to what we do here in Nigeria.

That is why we must fashion out ways to solve our challenges as a Nation.

*The article was first published on TOA magazine