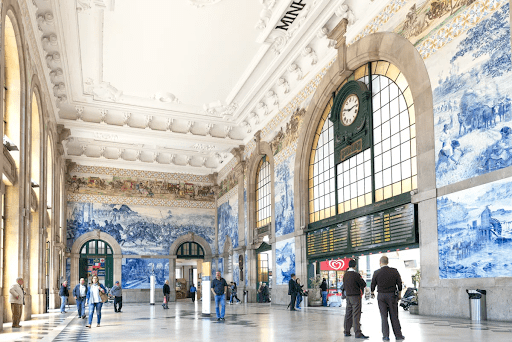 Train stations are usually filled with a hurried frenzy of travelers, and commuters catching a quick bite to eat before their trains depart. But some terminals are worth lingering in—whether you’re hopping on a train or not. From the modernist, all-white structures of Santiago Calatrava to an early 1900s masterpiece from Eliel Saarinen, these stations have both form and function—and you’ll find them scattered all over the world. Read on for the most beautiful train stations, with expected picks like New York’s Grand Central Terminal, and more surprising locales, like those perched on a mountaintop in the Swiss Alps or seaside in Thailand.

While Kuala Lumpur Railway Station hasn’t served as the Malaysian capital’s main train station for 20 years, its Indo-Saracenic architecture continues to be a draw. Only Komuter trains stop here, but visitors can still admire the white facade, decorative arches, and chhatris, or dome-covered pavilions. Look across the street too, at the similarly designed train service administration building, which was completed in 1917—a few years after the train station first became operational.

Located in Kanazawa, about two hours northwest by train from Tokyo, this station’s architecture blends traditional Japanese elements with contemporary design. The giant, wooden Tsuzumi-mon Gate at the station’s entrance is inspired by torii-style sacred gates and tsuzumi drums, and leads to the aluminum and glass terminal. Be sure to look for the water garden just inside the gate, which features a fountain that also serves as a clock.

This train station’s history is as impressive as its design: the Sirkeci Terminal once served as the final station on the famed Orient Express train route. Built in 1890, the station now houses a one-room museum dedicated to its history and the Orient Express. Once you’ve explored the station and train’s history, wander around the station to take in the stained glass windows, sparkling chandeliers, and Oriental-Gothic façade. Today, the station only serves local passengers on Marmaray public transport trains.

Designed by Zaha Hadid Architects in 2017, the Afragola station sits on the outskirts of Naples and serves high-speed and intercity train passengers and commuters from the region. From above, the concrete and steel station looks like a trapezoidal snake crawling along the Italian countryside. It’s long curving shape actually serves as a walkway, though, connecting the two communities on either side of the tracks, in addition to providing space for shops, restaurants, and other amenities for train travelers.

Many of Portugal’s beautiful train stations are decorated with the country’s iconic azulejo tile work (check out Pinhão’s train station and São Félix da Marinha’s Granja train station) but the São Bento Station in Porto takes the cake. It is filled with floor-to-ceiling, blue-and-white tiles that illustrate Portugal’s history and rulers, as well as the progress of transportation up to the early 1900s, when the pieces went up. There are a whopping 20,000 tiles in total in this light-filled station.

This is by far the smallest train station on our list, but the Hua Hin train station—located four hours from Bangkok by train—packs the most colorful punch. Decorated in yellow, white, and red, the station features a Thai-meets-Victorian, gingerbread house style of architecture. Across the tracks, the Phra Mongkut Klao Pavilion, pictured, once served as a royal waiting room. While it isn’t open to visitors, the building makes for a great photo op. Two train cars and a steam engine are on view outside the station, as well, for railway fans.

Some 82 million passengers transit through Grand Central terminal each year, catching Metro-North trains to upstate New York and Connecticut and subways around New York City. It’s become a destination for tourists, too, thanks to its Beaux Arts design, the main concourse’s iconic green zodiac ceiling mural and central clock, and restaurants, like the famed Grand Central Oyster Bar and The Campbell Apartment speakeasy.

Built in 1919, the station’s iconic architectural feature is four sentry statues that hold spherical lights flanking the terminal’s entrance. The granite guards welcome hundreds of thousands of commuters and long-distance passengers heading to St. Petersburg, Russia, and Finnish Lapland, among other destinations, each day. The station was designed by Eliel Saarinen, who would soon immigrate to the U.S. and whose son, Eero, would go on to design the iconic TWA terminal (now a hotel) at New York’s JFK airport.

Rebuilt in 2009 by famed architect Santiago Calatrava, the station connects passengers with a high-speed rail to France and Germany, plus intercity travel within Belgium. The interior of the station is remarkably open and bright, thanks to the sweeping, arched steel-and-glass ceiling that reaches 110 feet in height. The station is actually built without exterior walls, leaving the platforms open to the air, but protected from the elements as the roof extends well beyond the station’s concourse.

Located in Mumbai and immortalized in Slumdog Millionaire, this train station is a UNESCO World Heritage Site. It was built to commemorate Queen Victoria’s Golden Jubilee in the late 1890s and now serves more than 3 million daily passengers traveling by commuter and intercity trains.

The central terminal in the largest train station in Madrid has been transformed into a greenhouse, with a verdant 43,000-square-foot tropical garden filled with everything from Brazilian rubber trees and South African birds of paradise to cacao plants. The garden is surrounded by cafés, restaurants, and waiting areas, and connects the various terminals that make up Atocha, including high-speed AVE trains, intercity trains, and Metro lines.

The second station designed by Santiago Calatrava on this list, Lisbon’s modernist Gare do Oriente is made up of Gothic-inspired concrete arches and an intricate lattice of steel and glass “trees,” as the architect describes them. While the bright white station is a marvel in the daytime, it is at its finest at night, when the geometric forest is lit up from below. Besides serving as a prime example of Calatrava’s work, the beautiful train station functions as a bus terminal and hub for high-speed, regional, and commuter trains.

This mint green, Beaux Arts–style station is one of the most recognizable buildings in Maputo, Mozambique’s capital. Its design features vintage glass doors and wrought iron latticework, and it’s trains connect Mozambicans with South Africa, Swaziland, and Zimbabwe. When visiting, allow extra time to explore the railway museum inside, which has information on the station’s inception and two antique trains on display.

Passengers on French rail company SNCF once voted this as the most beautiful train station in the country—and it’s one of our favorites, too. The 1908 church-like station is a designated historic monument and features a stained-glass depiction of Charlemagne and a 130-foot clock tower. The journey from Paris by train takes about 1.5 hours, and this station offers connecting trains to Luxembourg, Strasbourg, Lyon, and more.

At more than 11,000 feet above sea level, the small Jungfraujoch station is the highest in Europe. To get there, hop on a train to Kleine Scheidegg from Interlaken; the journey through the Alps to the station will take about two hours. Once you arrive, take the elevator to the viewing platforms and pictured observatory on the top of the mountain.