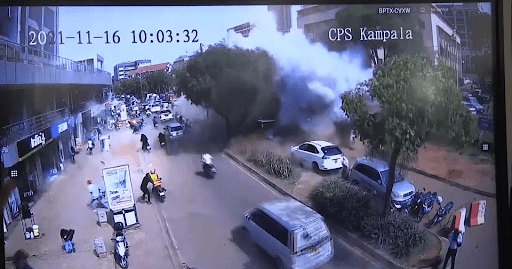 A tragic explosion has occurred in the central business district of Kampala, Uganda. It was near the entrance to parliament and the central police station. 3 people have died and 33 have been injured in the explosion.

A situation described by the cops “Two suicide bombers were clearly captured (by security cameras) who were on two motorcycles. They were disguised as motorcycle taxi drivers. They were carrying the bombs on themselves and detonated which killed them instantly. This was a clear attack but who is behind all this is a matter that is under investigation.”

The health ministry posted on Twitter that “Kampala’s Mulago Hospital is treating 24 people and four of them are in critical condition. Our health workers are working around the clock to save the lives of those injured,”.

The road to parliament is banned for use now and people are just crying, everyone else is just trying to get away from these areas,” People are trying to evacuate office buildings and the buildings are locking up and not letting anybody inside. According to police, last month both those attacks were connected and were carried out by the Allied Democratic Forces (ADF) which the United States has linked to the Islamic State group.

Parliament canceled its Tuesday session because of the attacks and informed the members to avoid the area “as security forces are working hard to restore order”. The premises are under tight security, with heavily armed soldiers securing the area. The forensics team reached there in white overalls inspected the blast site for clues.