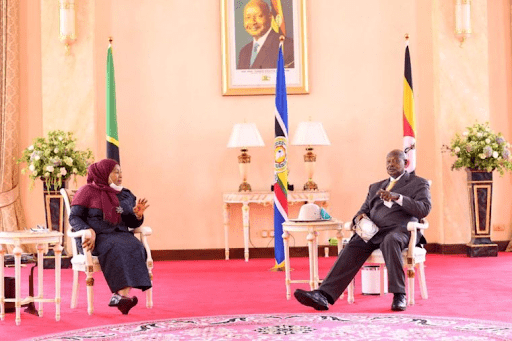 Total SE and Ugandan officials signed agreements for an oil production that will turn the East African country into a major crude producer and exporter. According to a broadcast of the ceremony, which was attended by Ugandan President Yoweri Museveni and Tanzanian President Samia Suluhu Hassan, Total CEO Patrick Pouyanne was among those who signed deals on Sunday. Since the first commercial oil discoveries 15 years ago, the negotiations have been subjected to several delays. China’s biggest offshore oil and gas producer, Cnooc Ltd., and Uganda National Oil Co. are also partners who participated.

The partners intend to build the Tilenga and Kingfisher discoveries near Lake Albert, as well as a 1,443-kilometer (897-mile) heated pipeline to transport Uganda’s waxy crude to Tanzania’s Tanga port for export. The French explorer owns 57% of the oil field licenses and a significant stake in the pipeline project.

Total anticipates reaching a production plateau of 230,000 barrels per day. According to data gathered by Bloomberg, this is more than Equatorial Guinea and Gabon, two African OPEC members.

Uganda, Tanzania, and Total, a French oil company, are expected to sign agreements on Sunday to build a heated pipeline that will transport crude oil from western Uganda to the Indian Ocean coast. The pipeline, which will be the world’s longest at 897 miles, is scheduled to start construction this year. President Samia Suluhu Hassan, Tanzania’s new chief, is in Uganda to sign the papers, possibly her most significant executive action since taking office last month. The agreements, which have been stalled for years due to tax conflicts, administrative delays, and Hassan’s predecessor’s death, will be signed by Ugandan President Yoweri Museveni and officials from Total, a majority shareholder in Uganda’s oil fields.

Despite concerns about recent drops in crude prices, Ugandans remain optimistic about the potential for oil exports to propel the East African nation into upper middle-income status by 2040.

In 2019, Uganda’s annual per capita income was less than $800. According to a 2015 World Bank report, the economic benefits would be significant if local firms were successful enough to win lucrative oil service contracts.