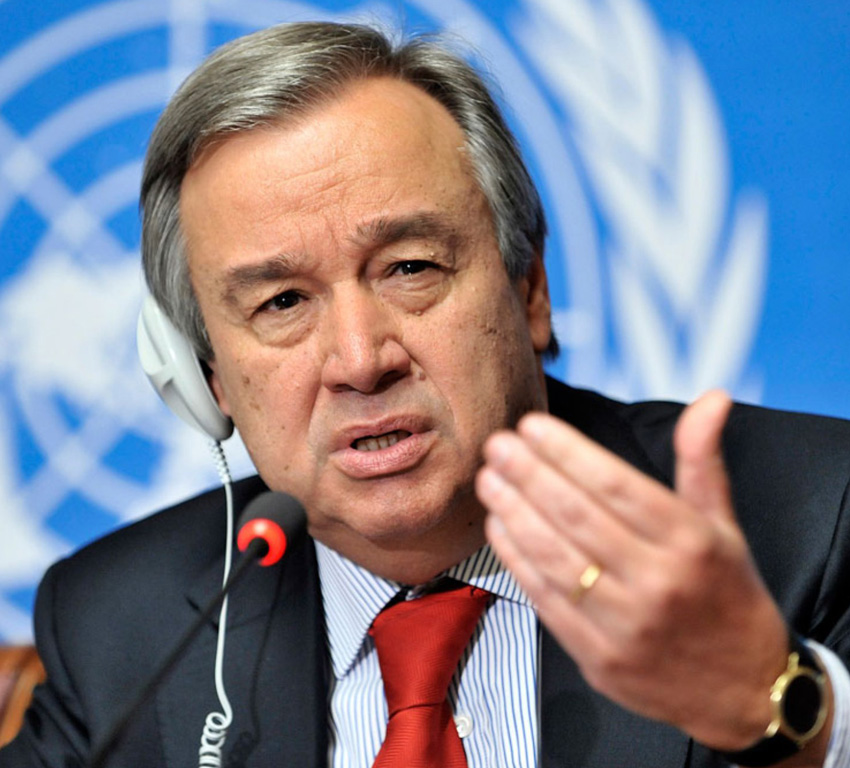 “United Nations peacekeeping is an investment in global peace, security, and prosperity. Around the world, the Blue Helmets are the concrete expression of the Charter’s determination “to save succeeding generations from the scourge of war.” The achievements of peace operations are a source of great pride to us all. When they fail, it causes us pain and drives us to improve.

United Nations peacekeepers have contributed to a legacy of stability from El Salvador to Namibia, from East Timor to Côte d’Ivoire, and from Mozambique to Cambodia. Fifty-four missions have completed their mandates and closed; two more will do so in the months ahead.

That is our objective for every peacekeeping mission: to do the job entrusted to it. To save lives. To prevent mass atrocities. To set the stage for stability and sustainable peace. And to close. And, from start to finish, to be cost-effective. Today’s peacekeeping budget is less than one half of one percent of global military spending.

At the start of my first day in office, I laid a wreath to honour more than 3,500 fallen peacekeepers who gave their lives for the ideals of the United Nations Charter. We owe them a great debt for their dedication and courage. The safety of peacekeepers will remain our priority.

We need a comprehensive strategy that supports the diverse range of our missions and takes account of the entire peace continuum, from prevention, conflict resolution and peacekeeping to peace-building and long-term development.

This strategy must be based on two overriding principles:

First, there is no one-size-fits-all peace operation. While some missions have straightforward mandates that focus on separating warring parties or monitoring ceasefires in a relatively stable environment, others have more robust mandates, to protect civilians and deal with multiple armed groups. Protection of civilians will continue to be a key priority for peacekeeping.

In Somalia, we are supporting the African Union peace operation, backed by a Security Council mandate. In Mali, while UN peacekeepers are not and should not be directly engaged in fighting terrorism, they coordinate with counter-terrorist forces.

The Council recently expressed its support for the regional initiative by Member States in the Lake Chad Basin to develop a Multinational Joint Task Force to combat Boko Haram.

Finally, our political missions are supporting peace and reconciliation in Afghanistan and Iraq, together with development agencies and others.

All these operations play a vital role in building and sustaining peace.

But our political strategies, management systems and administration are not set up to support them effectively. We must plan for diversity across time and geography, creating flexibility without additional costs.

Second, the success of every mission depends on an active political process, with the commitment of all stakeholders, particularly governments. This Council has a vital role in securing this commitment and cooperation. I will personally support this goal in any way possible. I have spoken before to this Council about the urgency and necessity of a surge in diplomacy for peace.

We have already made important recent reforms to peacekeeping. I thank Mr. Hervé Ladsous for his important role, and count on the continued leadership of Under-Secretary-General Jean-Pierre Lacroix. We have increased the number of troop and police-contributing countries and improved the generation of forces, so that they can be deployed more quickly. Modern technologies are improving situational awareness and analysis. We have decentralized key functions and we are strengthening performance management and accountability.

These reforms have reduced the cost per capita of uniformed peacekeepers by 18 per cent since 2008, and decreased the number of civilian staff significantly.

But much remains to be done.

In the short term, we must end operations that have achieved their goals and reform those that no longer meet needs on the ground. Our missions in Côte d’Ivoire and Liberia will soon close, and we must consider reforms and exit strategies for other long-standing missions. In Haiti, we are ready to transform our mission so that it will focus on political support, institution-building and development. In Darfur, the changing situation on the ground may call for a significant reduction of forces.

Each mission must be considered in its unique political context. In that spirit, I commend the Council’s unanimous decision last week to renew the mandate of our operation in the Democratic Republic of the Congo, MONUSCO.

In the longer-term, I see nine areas for reform.

First, I have established a team to examine how to improve our peace and security architecture, which will report to me by June. Second, we need greater efficiency and accountability. Too many of the rules and regulations of the Secretariat seem designed to prevent rather than facilitate our work. I am committed to changing this, and I hope Member States will support me, including in the Fifth Committee of the General Assembly.

Third, peacekeeping operations need clear, realistic and up-to-date mandates from this Council, with well-identified priorities, adequate sequencing and flexibility to evolve over time. Fourth, women must play a far more active role in peace operations, as troops, police and civilian staff. This is not only because gender parity is essential for its own sake, but because the involvement of women is proven to increase the chances of sustained peace, and to reduce incidences of sexual abuse and exploitation.

Fifth, we need better and more coordinated planning, control and leadership of our operations and strategy. The creation of an Executive Committee and closer cooperation between the Department of Political Affairs and the Department of Peacekeeping Operations are aimed precisely at addressing this. I also plan further decentralization to empower my Special Representatives.

Sixth, we must increase the use of modern technology. This will help us to become more flexible and mobile.

I encourage the trilateral arrangements through which countries with the capacity to do so are providing training and equipment to peace operations. But alongside these arrangements, I count on these countries to step up their troop contributions.

Seventh, we need to communicate and increase awareness that United Nations peacekeeping operations are a necessity for global peace, security and prosperity, and that they are achieving results. Eighth, we need to deepen ties with our regional and sub-regional partners. At the African Union summit earlier this year, I committed to strengthening our partnership on political issues and peace operations, with stronger mutual support and continued capacity building.

United Nations peace operations will continue to need the vital partnership of the European Union. As the security of Europe is directly affected by situations in which peacekeeping missions are deployed, it is likely that there will be further opportunities for cooperation.

It is equally important to develop our relationships with sub-regional organisations including ECOWAS, IGAD and others. I call on this Council to consider supporting the initiative proposed by the G5 Sahel.

Ninth and finally, these partnerships must be based on solid, predictable funding. I hope the Council will consider supporting missions that are backed by a Council resolution and done by our partners either with assessed contributions, or by promoting other predictable financing mechanisms.

Peace operations are at a crossroads. Our task is to keep them relevant with clear and achievable mandates, and the right strategies and support. Success depends on our collective efforts. You can count on my full commitment.

But I also count on the unity and support of this Council, to fulfil its primary responsibility for maintaining international peace and security in this changing world. Thank you very much.”