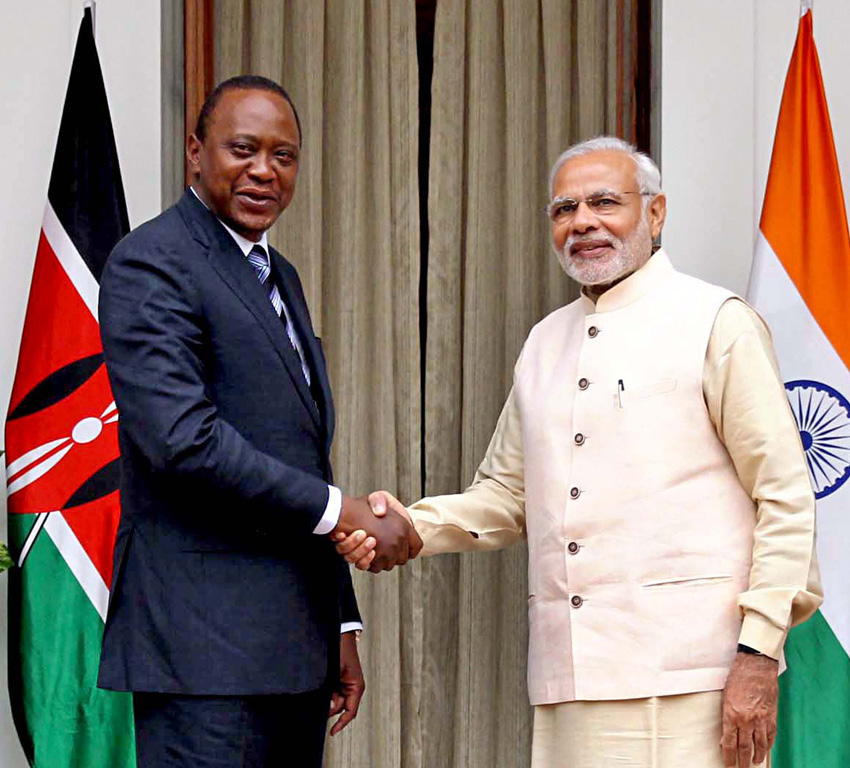 It is not often that one sees leaders of two world’s fastest growing economies reciprocating each other’s gestures at apex political and business summits. And when it happens, it signals the blooming of a strengthened bilateral relationship. Kenyan President Uhuru Kenyatta’s visit to India, to participate in the ‘Vibrant Gujarat Summit’ in January 2017, as a special guest, came within six months of the Indian Prime Minister Narendra Modi’s visit to Kenya. In a joint communique issued after his visit to Kenya, Modi had commended how Kenya had blossomed under the ‘strong and forceful leadership’ of Mr Kenyatta, and the latter’s presence at the Summit gave India an opportunity to discuss the expansion of economic ties between Kenya and India via Gujarat.

The ‘Vibrant Gujarat Summit’ is close to the heart of the Indian Prime Minister – not only because he hails from Gujarat but also because he is said to have fathered the concept of this summit viz rekindling the pace of investments in Gujarat.

Precisely the success of this biennial meet holds upmost significance for him. The 8th leaf of the Vibrant Gujarat Summit 2017 was organised from January 10 to 13, 2017, at the Mahatma Mandir Exhibition cum Convention Centre, with the reappearance of ‘Sustainable Economic and Social Development’. From a regional investment fair in 2003 to a platform where heads of states and governments, international institutions and academia, and the who’s who of the corporate world from across the globe land in Gujarat, the conclave has become a central point to discuss development and promote cooperation. This year, the summit saw the participation of about 110 countries including the United States of America, the United Kingdom, Sweden, Canada, Japan and of course one of India’s most important African partners, Kenya.

In his speech at the summit, Kenyatta marketed his country as a preferred investment haven. He had said, “The Indian investors already in Kenya will testify that we are an open and safe investment destination, with a favourable business environment facilitated by the Government’s efforts to improve business regulation procedures and requirements.” India’s premier salt-to-steel conglomerate, the Tata Group of companies, is one of Kenya’s leading exporters. In fact, Tata Chemicals Magadi is Africa’s largest soda-ash manufacturer. Established as Magadi Soda Company in 1911, it has been producing soda ash at Lake Magadi for over a hundred years now. Kirloskar Kenya, too, has been flourishing in Kenya since 1976. It was set up in Nairobi and is an offshoot of the Pune-headquartered Kirloskar Group. The success of other Indian corporates such as the Essar Group of Companies, Reliance and Dr Reddy’s in Kenya are further testaments to the Kenyan President’s aforesaid statement. This positive sentiment was echoed by the Indian Business community spearheaded by Chairman and Managing Director of Kanoria Chemical Limited, Mr Rajya Vardhan Kanoria, during the Kenya-India Business Forum held recently in New Delhi. The meet was also graced by members of the Kenya Private Sector Alliance (KEPSA) and the Kenya National Chamber of Commerce and Industry (KNCCI). India’s Minister of Information and Broadcasting, Rajyavardhan Singh Rathore reiterated that, “The sheer energy that President Kenyatta engages to improve the welfare of Kenyans reminds me that leadership matters. A lot of times, we as business people, like to see the infrastructure that is there and the policies that are in place before we invest in a country. But often these are linked to the leadership that is in that country.”

“There are a lot of opportunities for Indian investors in Kenya under the leadership of President Kenyatta than ever before,” he affirmed.

‘Building’ the road ahead, literally!

From 76, to 21, 304 to 25, 578 – this is the number of MoUs signed at the summit in 2003, 2015 and 2017 respectively. The numbers speak itself why this summit has been the apex platform for business avenues in Gujarat for the whole world. Of the 25, 578 pacts signed at the 2017 edition of the Summit, as many as 18,533 were signed in the Micro, Small and Medium Enterprises (MSME) sector and 1,625 agreements in the urban development sector. This development is significant in view of the fact that Kenya has, in recent years, emerged as a safe nest for the infrastructure sector. India’s largest private sector company Reliance Industries in collaboration with Jaydev Mody-led Delta Corp Limited had in 2013 purchased land worth $2 billion in Kenya for cashing in the real estate opportunities in the country. Elucidating on the investment opportunities in the infrastructure sector for Indian businessmen, the Kenyan President had said, “We have invested in mega projects and opportunities that include expansion of the Port of Mombasa, airports, transport corridors, rail links and Special Economic Zones to make Kenya a global economic and business hub.”

Among the various objectives of the Vibrant Gujarat Summit were strengthening the foundation for Gujarat to become economically and socially the most developed state in India by 2030. Kenyatta’s vision of taking Kenya to dizzying heights aligns with this objective. The President also said at the summit, “Gujarat is an important economic powerhouse of the world. Sectors where we can mutually benefit are manufacturing, fertilizers, petrochemicals, agribusiness, mining, gas and coal.”

What is one of the prime factors that one considers before starting a business venture? Location! Gujarat and Kenya are both placed on the world map on locations that are strategically significant. While Gujarat is surrounded by the Arabian Sea on one side, which gives it an easy accessibility to western, Middle-east and African markets, Kenya shares its boundaries with the magnificent Indian Ocean. This gives Gujarat a coastline of 1,600 km (longest in India), and a far-stretching 1,420 km coastline to Kenya. “Kenya’s central geographical position in the east and Central African region is ideal for investors to use as a launchpad to penetrate the enormous market of over 650 million people at the Tripartite Free Trade Area arrangement which brings together 26 countries in northern, eastern and southern Africa,” President Kenyatta had mentioned at the Summit.

Financial services and other areas

In August 2016, Kenya was ranked first among 26 developing nations in ensuring broad access to financial services, according to a United States think-tank. Drawing attention to this feat, Kenyatta had noted that Kenya has one of the highest mobile phone and internet connectivity in the African continent. With mobile phone penetration rates reaching as high as 80%, almost every person on the street has a phone today and Indian mobile financial services company such as Indian Mahindra Comviva, Airtel Kenya, KenIndia Assurance, Sameer Africa, MP Shah Hospital and I&M Bank have thrived in this prolific sector.

The other areas that the President singled out for investments in Kenya during the summit include the cotton textile industry, agriculture-related business, fertilizer manufacturing, pharmaceuticals and the blue economy.

Gujarat and Kenya are both placed on the world map on locations that are strategically significant. While Gujarat is surrounded by the Arabian Sea on one side, which gives it an easy accessibility to western, Middle-east and African markets, Kenya shares its boundaries with the magnificent Indian Ocean.

Treading the path of development together

President Kenyatta’s emphasis and involvement simply highlights the fact that the India-Kenya relationship will go a long way with Gujarat serving as the gateway to India the way Kenya is emerging as a gateway to Africa. In anticipation of many more summits together, the future looks bright for a Vibrant Kenya and a Vibrant Gujarat.