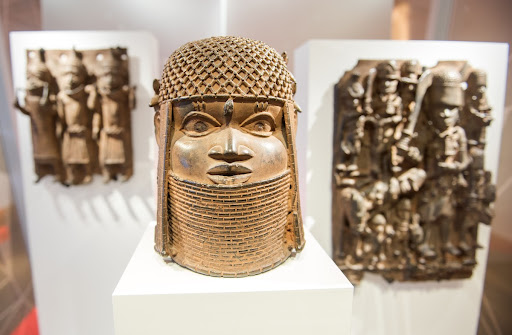 Nigeria, once home to artifacts that identified with its culture and history, especially the Benin Artifacts that hold a strong symbolism in the country, was looted off them during the colonial period.

With extensive pressure from Nigeria, western countries are now returning the priceless artworks that adorned the Western Museums.

Benin Bronzes are beautiful and remarkable art pieces that originated from the Kingdom of Benin, now Nigeria. The artworks symbolise the restoration period debate in Nigerian history. With a long-standing discussion over the return of these precious artifacts, two British Universities- The University of Aberdeen and Cambridge University finally returned two of these art pieces. Furthermore, Nigeria and Germany signed a memorandum of understanding which defined a timetable for the return of 1100 sculptures from the museums of Germany.

What are the Nigerian Benin Bronzes?

The Benin Bronzes belong to a group of objects that were looted from the Kingdom of Benin in 1897. Even though the number of looted Benin Bronzes is unknown, the total number is believed to exceed the 3000 mark. These artifacts include tusks, sculptures of Benin’s rulers, figurines, an ivory mask amongst others. During colonial rule, these art pieces were looted by the Britishers and were then dispersed around the globe, finding their way to the museums across Europe.

Contrary to their name, not all of the art pieces are made of bronze, but some form of metal, representing the best examples of Benin Art. The Benin Bronzes hold a special and notable appreciation in African culture as well as Europe. The discoverers were mesmerized by the concept that a culture that is usually identified as backward was responsible for such an advanced metal art form.

The Kingdom of Benin was the then Hub of the African civilization way before the Portuguese traders visited the region which shatters the myth encompassing Benin’s metallurgy knowledge coming from the Portuguese travellers. A lot of the sculptures belong to the thirteen century which was the period unaffected by Colonial rule.

The art pieces are made mostly of brass and bronze, with some in the combination of both metals and others made of wood, ceramic and ivory, using lost-wax coating which made them one of the best sculptures. Bronze and ivory metals had a very pivotal role in the courtly life and rituals of the Benin Kingdom. They were used to decorate the royal palace and were hung on the pillars by nails. As courtly art, they had the principal objective to glorify the divine king of Benin- Oba.

How were the Benin Bronzes marauded?

It happened in the year 1897 when an unarmed British explorer James Phillips visited the Kingdom of Benin. As the Kingdom’s guest he was welcomed and honoured by the ruler of Benin Kingdom, Oba Ovonramwen. While he was warned by the kingdom to not return to the region during the sacred period of its members, he still continued his expedition. The Kingdom’s chiefs reported to Oba that Philips’s expedition would disrupt the sacred rituals in the Kingdom and this led to a dispute.

The following mission caused the death of 200 porters by Africans. To avenge the death of its people, the Britishers sent troops to steal the artifacts from the Kingdom of Benin. The Britishers walked away with thousands of priceless artworks and sculptures which were later dispersed across Europe as a trophy.

For most Nigerians, the Benin Bronzes are a reminder of the Colonial period and its long effects on African society as a whole. Nigerians have continued to demand the return of these artifacts from the museums of Europe. A U.S based artist Victor Ehikhamenor wrote an essay divulging the subject and mentioning how generations of Africa have lost its cultural and historical reference points due to the absence of its best art pieces. He also stated that what belongs to Africa should be returned and its people should not have to ask for it over and over to get it back.