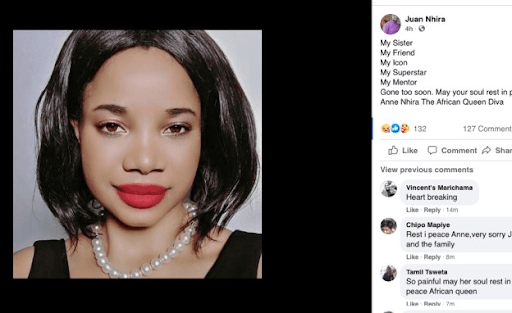 Former Studio 263 actress Anne Nhira, who died due to the injuries sustained during a robbery in South Africa has been awarded a State-assisted funeral as announced by Chief Secretary to the President and Cabinet Dr Misheck Sibanda.

“Please be advised that His Excellency the President has approved a State-assisted funeral to the late Anne Nhira. You may proceed with necessary arrangements.” Anne’s father, Charles, said they were expecting autopsy results to plan.

The body will be sent to Zimbabwe after the post-mortem results are released. Anne became famous in Zimbabwe’s first soap opera “Studio 263”. She was playing the affable character of Vimbai Jari. Anne loved to read books and had few friends, as she once said in an exclusive interview. She moved to South Africa around 2015 where she was trying her luck in the film and television industry.