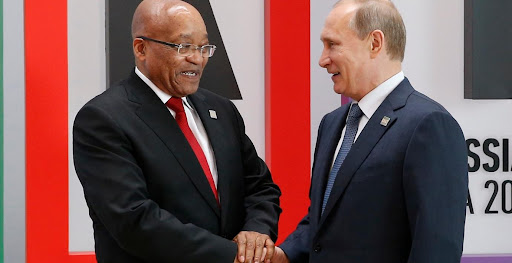 As debate raises a heated table and field discussion over Russia’s ongoing invasion of Ukraine, Former South African President Jacob Zuma backed President Vladimir Putin, referring to him as the “Man of peace”.

While western nations imposed punitive sanctions on Russia, which also included Vladimir Putin’s foreign assets, considering the conflict and backlash he has received, most African nations have maintained a neutral stance on the burning issue. Following the backlash from western nations, Mr Zuma has called out Mr Putin’s actions to be justifiable.

He said in his interview that the world needs peace and urged people to contribute to peace globally swiftly to save lives. After South Africa abstained from the UN votes condemning Russia’s actions, Mr Zuma’s support to Russia was expected. Mr Zuma, like many others, has received training from the Soviet Union, during apartheid, as he revived the relationship between South Africa and Russia.

Mr Zuma, the ex-President was forced out of Presidential office and position by his own party in the year 2018, after the ANC (African National Congress) was dented with corruption allegations.