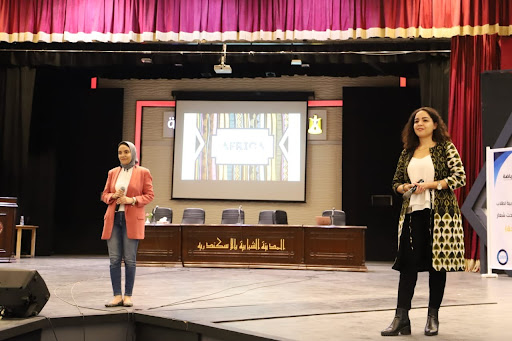 Afromedia Initiative participated in a panel discussion titled Means of Enhancing the African Identity among Egyptian Youth – Case Study: Afromedia, through its representatives, Merihan ElSalakawy, a researcher at the African Union Commission, and Rotane Khaled, a researcher specialized in cultural development within the Francophone countries in Africa. The session took place on the third day of the Students’ Unions Forum, which was launched by the Ministry of Youth and Sports, the Universities Administration, and the Central Administration of Cultural and Voluntary Programs, under the auspices of the Minister of Youth and Sports in November 2021, with the participation of 300 young men and women leaders of student unions from 26 universities nationwide at the Youth Sports City of Abu Qir, in Alexandria.

In a related context, Rotane Khaled, a graduate of Senghor International University, a master degree holder in cultural management and heritage, and a researcher specializing in cultural development within the Francophone countries in Africa, presented at the beginning of her speech a historical overview of the African continent, cultural heritage, and nature in Africa. She also addressed ways and models of projects that contribute to supporting development in Africa, then she talked about the role of the Afromedia Initiative in transferring the efforts of Egypt towards the development of the countries of the African Continent, and mobilizing support towards continental agreements and programs.

In addition to that, “Rotane Khaled” narrated the history of Egyptian-African relations starting from the national liberation movements until now, she also drew the attention of the participating youth towards the study opportunities in the field of African affairs and took Senghor University as a model, as one of its graduates.

From his side, Hassan Ghazali, the founder of the Afromedia Initiative, indicated that the initiative comes as one of the mechanisms of Egypt’s Vision 2030, that aims to support the foreign policy of the Egyptian state and increase the cultural communication with the countries of the world, especially in the African continent, stressing that the initiative works as one of the tools of developmental media, which in turn It would involve community members, especially young people, and raise their awareness of the issues of the continent in order to enhance their social responsibility as ambassadors in their sphere of influence, thus ensuring their participation, as well as gaining their response to development plans and programs at the regional and international levels.