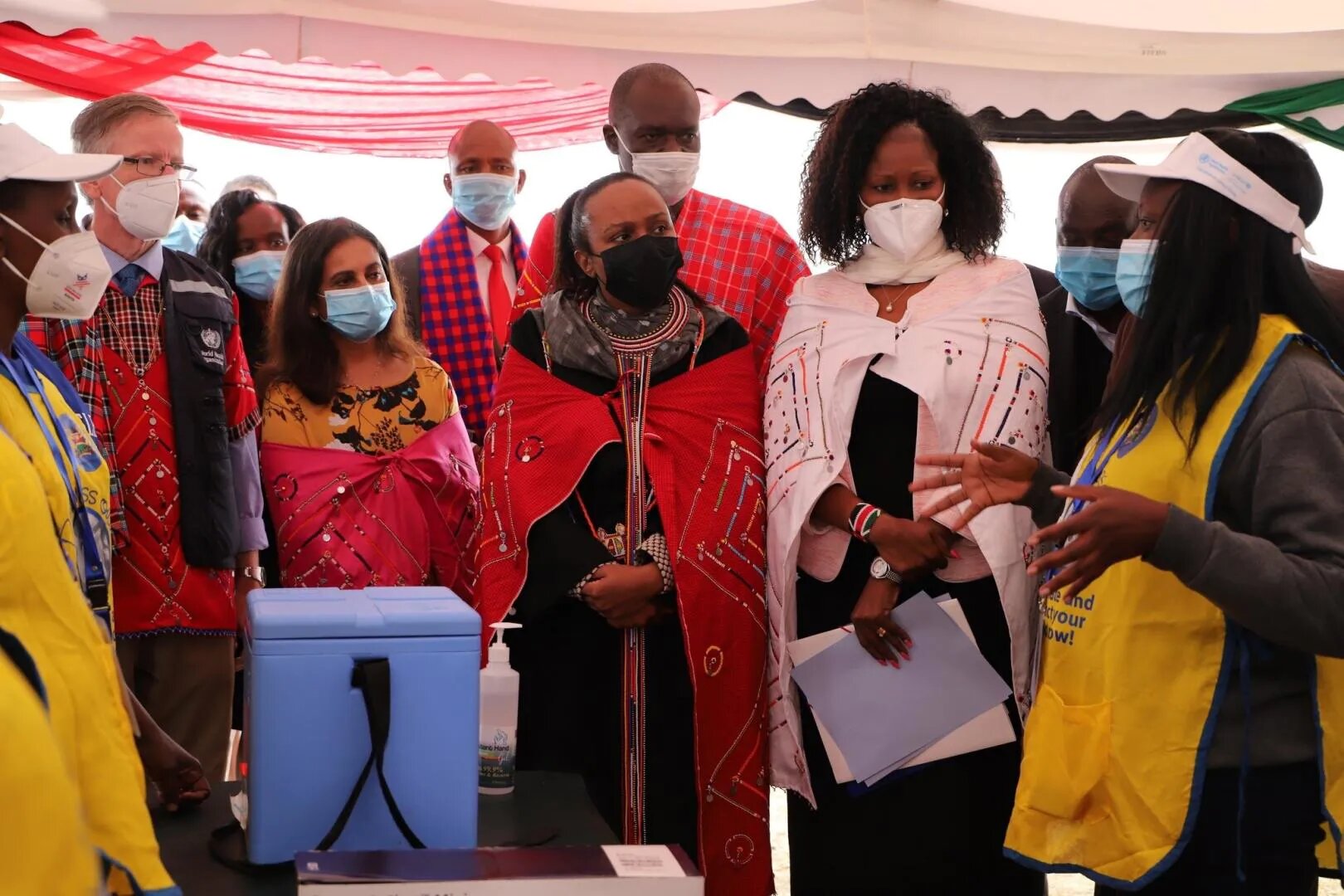 A health worker speaks to MOH and UN officials at the launch of measles rubella campaign in Kajiado county. Almost 4 million children are targeted. Source: WHO Regional Office for Africa
Spread the news

The campaign, which will be conducted from 26 June to 5 July, aims to vaccinate 3.9 million children aged 9 months to 5 years, in 22 counties across Kenya the urgent measles and rubella (MR) vaccination campaign was launched today in Kajiado County by the Government of Kenya, with support of World Health Organization, WHO, UNICEF, Gavi the Vaccine Alliance, and US Centers for Disease Control and Prevention. The campaign, which will be conducted from 26 June to 5 July, aims to vaccinate 3.9 million children aged 9 months to 5 years, in 22 counties across Kenya.
The MR campaign is now underway in the counties of: Baringo, Bomet, Bungoma, Elgeyo, Garissa, Homabay, Kakamega, Kilifi, Kisii, Kisumu, Mandera, Marakwet, Migori, Nairobi, Narok, Samburu, Tana River, Trans Nzoia, Turkana, Vihiga, Wajir and West Pokot. The target counties were selected based on high numbers of unimmunized children and reported measles outbreaks.
“The Government of Kenya has always prioritized the health of the people and that is why we are taking this urgent action to protect children from measles and rubella,” Chief Administrative Secretary for Health, Dr Mercy Mwangangi said. “Children are a blessing from God and therefore there is no reason for them to suffer and die from preventable diseases. The vaccines are available free of charge and I urge all parents to ensure their children are vaccinated in order to protect them from these diseases.”
As part of the campaign, MR vaccines will be administered to children in health facilities, with mobile teams also providing vaccination in preschools, marketplaces, churches and other designated places on specific days. UNICEF has procured and delivered the vaccines and is supporting the mobilization of caregivers and communities. Mobile company AirTel is providing support through mass text messages, to raise awareness among parents in the target counties.
“All children have the right to access life-saving health care. Last year, routine health services including immunization were disrupted by the impact of COVID-19,” said UNICEF Representative to Kenya Maniza Zaman. “UNICEF is working hard to ensure that young and vulnerable children are vaccinated against measles and rubella. Children under five-years-old can die from measles complications and if the virus circulation is not stopped, their risk of exposure increases daily. We know that vaccination is by far the best way to keep these children safe.”
Since 2016, the MR vaccine has been offered as part of the routine childhood immunization programme in Kenya, with one dose administered at nine months and the second dose at 18 months. To ensure adequate protection in communities, it is important that at least 95 per cent of children receive the two recommended doses. In 2020, only 85 percent of children in Kenya have received the first dose and less than 50 percent have had the second dose.
“This mass vaccination will provide an opportunity for all who missed their vaccines to get it and a supplemental dose for those who received their previous dose to boost their immunity,” WHO Representative to Kenya Dr Rudi Eggers said. “Vaccination against measles will protect children from this debilitating disease which is one of the leading causes of death among children less than five years old. Vaccination saves lives, protects against diseases and ensures that children are healthy and thus do well in school and later on in life.” No child should suffer measles or die from measles or other vaccine preventable diseases while there is an effective vaccine that is made available by the Government of Kenya.”
Globally, reported measles cases fell from over 850,000 in 2000 to 132,000 in 2016, largely due to increased vaccine coverage in low and middle-income countries. However, in recent years global cases have surged dramatically. In 2018, there were nearly 360,000 cases recorded worldwide, while measles deaths climbed 50 percent from 2016 to 2019, claiming over 207,500 lives in 2019, according to data from WHO.
Source: WHO Regional Office for Africa.