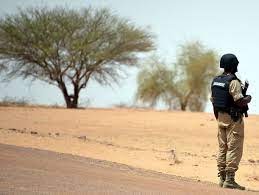 A government source confirmed that at least 32 people, of which 28 are military police officers and 4 civilians were killed in the barbaric attack on the Burkina Faso gendarmerie post. This attack is claimed to be the deadliest since the jihadi violence on West Africa’s security forces.

According to Burkina Faso’s Communications Minister; Ousseni Tamboura, the attack on the military detachment in the Sahel’s Soum province happened on Sunday morning by armed groups that still remain unidentified. He added that another attack happened the same day in the nearby town of Kelbo in northern Burkina Faso, but the attackers were repelled by the civilian auxiliary forces and soldiers.

The deadly act was called cowardly by the government and President Roch Kabore announced three days of national mourning to pay respect to the victims of the attack.

A senior researcher at the Event data Project & Armed Conflict Location, Heni Nsaibia said that the violence has escalated to a point of worrisome and that even though the death toll remains interim, the loss has become the largest ever recorded in a single attack on Burkina Faso’s security forces. He furthered his comment with the reported killing of militants and large-scale operations performed by the security forces, in recent weeks.

This attack is seen as the invasion of jihadi groups linked to the Islamic State group and al-Qaida who have been killing and displacing in the conflict-ridden nation. The militant insurgency has expanded across West Africa in recent years and is wearing down national forces with violence.

This latest attack is unclouding the untrained and ill-equipped security forces of Burkina Faso, who are still struggling to retaliate the action.