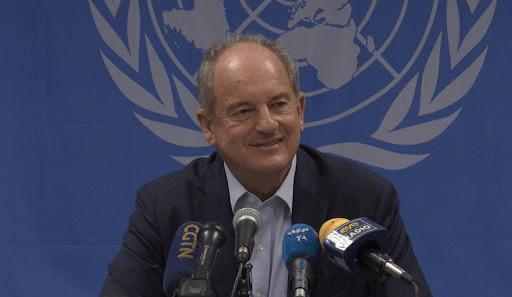 On the eve of David Shearer’s departure after more than four years as the UN’s top envoy in South Sudan, the Special Representative of the Secretary-General and Head of the United Nations peacekeeping mission thanked the people of South Sudan for their support and wished them well.

“I have so much admiration for the South Sudanese who I have enjoyed working alongside immensely. They are tough, resilient, and remarkably patient. I am inspired by their seemingly endless hope as they fight against huge odds to achieve the much brighter future they deserve,” said David Shearer. “I will miss this young country and wish it well from the bottom of my heart.”

“I urge the people and leaders of South Sudan to remain united and energized to push the peace process forward to fully implement the revitalized agreement and hold elections so communities across the country can finally enjoy true peace and prosperity,” he said.

“I have been extremely privileged to support South Sudan as it makes the difficult transition from war to recovery and peace. As my four years of service comes to an end, I am proud of the progress that has been made, including the ceasefire, peace deal, formation of a transitional Government and the installation of local leaders in the states.”

“I am also pleased and encouraged to see that most people who once fled in fear to UN Protection of Civilians sites have either returned home or are living in newly transitioned displacement camps under the responsibility of the South Sudanese Government.”

David Shearer said that, while important progress has been made, the peace process remains fragile and there is still much to be done, including picking up the pace on constitution-making, transitional justice, and economic reform. He said that courageous decisions need to be made to unify the armed forces of all sides.

The SRSG paid tribute to the UN agencies which have stood by South Sudan for many years and the almost 20,000 UN peacekeepers who are helping reduce violence and are bringing diverse communities together to reconcile and build peace.

“UNMISS is a stabilizing force that extends well beyond our physical presence. Our independent surveys have consistently shown that we are welcomed by nearly 80 percent of South Sudanese,” he said. “We are fully committed to securing durable peace by working closely with all political parties alongside regional and international partners.”

“As I said when I came to South Sudan, our success will be measured by the downsizing of our presence. That has started. Over the coming year, there will be a reduction of our military and police peacekeepers by around seven percent.”

UNMISS is also re-focusing its efforts to ensure it is fit-for-purpose in the evolving political and security situation.

“We are redeploying staff and resources to build the capacity of important local institutions, including the courts, the justice system and the national police, and prioritizing technical support for security sector reform as well as the election process. Protection is best done through fair and effective rule of law.”

David Shearer particularly thanked humanitarian workers for their provision of life-saving assistance to millions of people in need.

“Humanitarians are working in remote, difficult and, sometimes dangerous conditions to deliver much-needed support to vulnerable communities across South Sudan. I thank them for their courage in risking their own health and wellbeing to help others.”

“As I depart this country, my thoughts and best wishes are with the people of the world’s newest nation who we are here to serve and support in their journey towards lasting peace.”