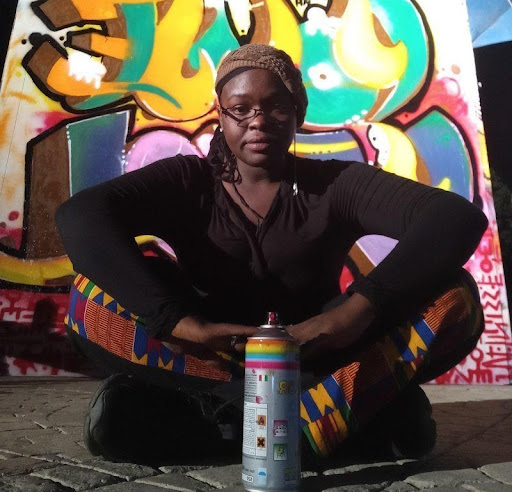 The male-dominated industry of art and creativity amalgamated in the hip-hop culture, in conventional Senegal has received its first artist, singer, and poet Dieynaba Sidibé, AKA Zeinixx. The talented woman has made it to the top of her field in the country that is mostly occupied by the males of the country. Zeinexx who pioneers in the art of graffiti had her moment of love at first sight at 17 when she was watching TV. By that time, she had already begun experimenting with the colours and drawings.

She recalls the moment when she was sitting in her living room watching TV and saw what people were doing across the walls. It was then she felt that this was exactly what she needed to do in her life and express her creativity on large canvases.

While Sidibe’s parents wanted her to focus on studies, she, who adopted her artist name Zeinixx, found her way into the Africulturban cultural association and connected with the budding graffiti community. It was there that her life changed and she persuaded one of the country’s impeccable artists, Oumar Diop to mentor her.

Zeinixx, now 31 said that she was already into drawings and was brushing her creative skills through the art of logos and comic characters, but adopting the art of graffiti showed her how to write and do the lettering in this artistic style. She started 14 years back with basic art love and skills and more than a decade later pronounced herself the first professional graffiti artist in Senegal.

Zeinixx is also a core member of the hip-hop culture that is often a male-dominated genre. Besides graffiti, Zeinixx has a deep interest in other forms of art and she also is a poet, entrepreneur, and singer.