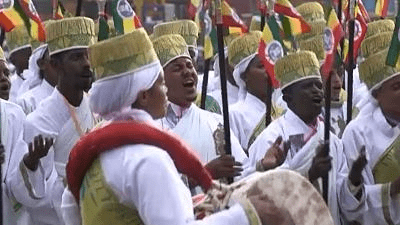 People wearing face masks and white clothes from Ethiopia’s Oromo nation descended on the capital Addis Ababa to mark the annual Thanksgiving festival known as Irreecha on Saturday. The crowds were significantly smaller due to political tensions and the COVID-19 pandemic and some of the terror attacks and a new wave of unrest. Security was tight with at least six security checks complete with body searches and, in some areas, sniffer dogs. The festival usually attracts hundreds of people, but only a few thousand were allowed to attend this year.

The Oromo, while being the country’s largest ethnic group, traditionally have expressed frustration over perceived marginalization. Prime Minister Abiy Ahmed is the country’s first Oromo leader and faces growing criticism by some Oromo that he hasn’t done enough for them. The Irreecha festival marks the end of the rainy season and the start of the harvest.