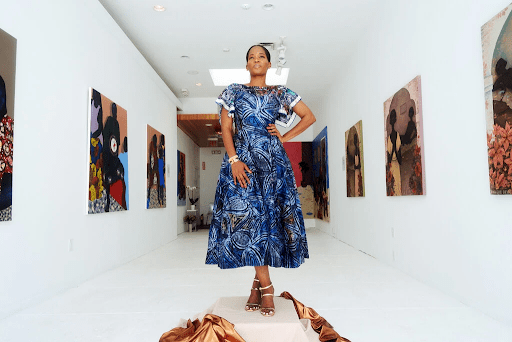 It certainly didn’t feel like a gallery opening. There was no crowd. No wine and cheese. Only a few people were allowed in at a time because of Covid-19 restrictions.

But despite the challenge of opening a new gallery devoted to largely-unknown African artists during a pandemic winter, Adenrele Sonariwo exuded an aura of serene resolve. She had succeeded in bringing to the United States a branch of the Rele Gallery that she founded six years ago in Nigeria, making it perhaps Los Angeles’s first contemporary gallery from the world’s second-largest continent.

“We’re doing the artists a disservice by just being in Lagos,” Sonariwo, 34, said at her compact gallery on a commercial stretch of Melrose Avenue. “It’s one thing to see the artwork on social media or online. But these artists have such amazing techniques that I felt it was really important to have people see them in person.”

At a time that African art is moving into cities like New York and London (with the 1-54 Contemporary African Art Fair, for example), Sonariwo is becoming an influential player by trying to give emerging artists a global platform.