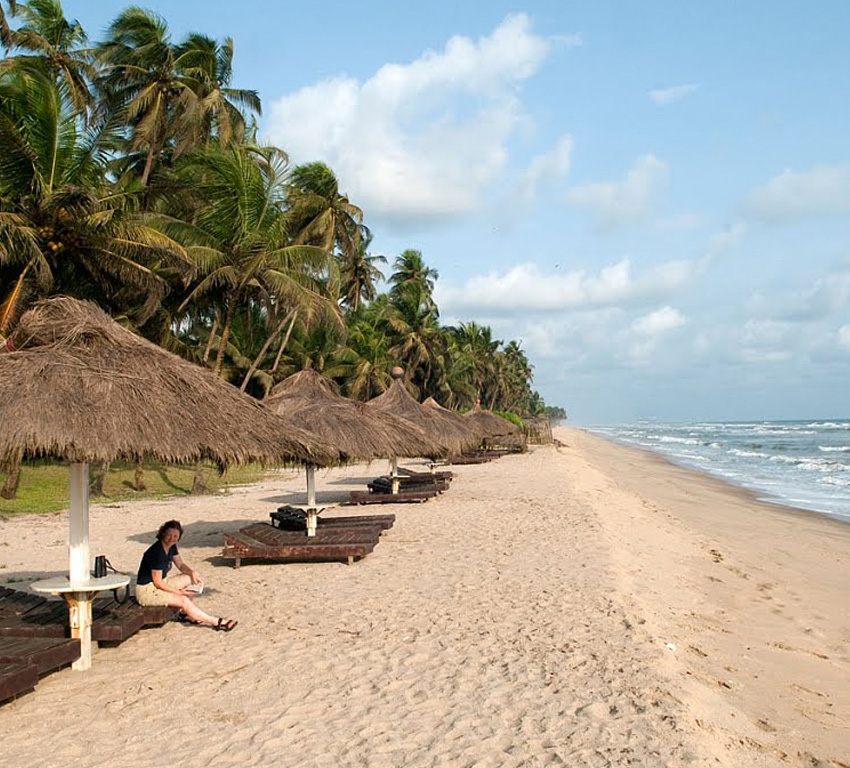 With the motto of “Freedom and Justice” they have risen everytime in their game act. Ghana, situated on the west coast, is one of the most prosperous and flourishing economies of the continent of Africa. It has often been referred to as an “Island of Peace” in one of the most chaotic regions on earth.

The word Ghana means “Warrior King” in the Soninke language. Speaking of language the official language of Ghana is English, other than that there are around 25 more languages spoken in the country. It is surrounded with Togo to the east, la Cote d’Ivoire to the west, Burkina Faso to the north and the Gulf of Guinea, to the south on the boundaries. The “Gold Coast” as its nickname, was the first country in sub-Saharan Africa to gain independence. The latest and most enduring democratic experiment started in 1992 and it is the main reason Ghana has gained recognition as a leading democracy in Africa. Ghana’s economy is carried forward mostly by the Agriculture, which employs approximately 60 per cent of the working population and accounts 37 per cent of GDP (Gross Domestic Product). The territory of present-day Ghana has been inhabited for millennia, with the first permanent state dating back to the 11th century. According to a recent discovery of oil in the Gulf of Guinea, Ghana has the potential to become important oil producer and exporter in the next few years.

Ghana at its best

Ghana is on the go under the hands of its President, John Dramani Mahama. Other than this, the parliament consists of 275 members. The GDP is 14 billion USD (2008). Ghana Cedi is the currency of the country. If we talk about the basics, Ghana has a very rich background in minerals; it exports Gold, Cocoa, Timber, Bauxite Manganese, Oil and Electricity. Beginning in the 15th century, numerous European powers contested the area for trading rights, with the British ultimately establishing control of the coast by the late 19th century. Following over a century of native resistance, Ghana’s current borders were established by the 1900s as the British Gold Coast.

A multicultural nation, Ghana has a population of approximately 27 million, spanning over a variety of ethnic, linguistic and religious groups. Five per cent of the population practices traditional faiths, 71 per cent adhere to Christianity and around 17 per cent are Muslim. Its diverse geography and ecology ranges from coastal savannahs to tropical jungles. Ghana is a democratic country led by a President who is both head of state and head of the government. Ghana’s economy is one of the strongest and most diversified in Africa, following a quarter century of relative stability and good governance. Ghana’s growing economic prosperity and democratic political system has recokened it a power in West Africa. It is a member of the Non-Aligned Movement, the African Union, the Economic Community of West African States (ECOWAS) and the Group of 24 (G24).

In sync with the world

Since independence, Ghana has been devoted to ideals of nonalignment and is a founding member of the Non- Aligned Movement. Ghana favours international and regional political and economic co-operation, and is an active member of the United Nations and the African Union. Ghana has a great relationship with the United States. All of the last three U.S presidents- Bill Clinton, George W Bush, and Barack Obama have made diplomatic trips to Ghana. Many Ghanaian diplomats and politicians hold positions in international organisations. These include Ghanaian diplomat and former Secretary-General of the United Nations Kofi Annan, International Criminal Court Judge Akua Kuenyehia, former President Jerry John Rawlings and former President John Agyekum Kuffour who have both served as diplomats of the United Nations.

In September 2010, Ghana’s former President John Atta Mills visited China on an official visit. Mills and China’s former President Hu Jintao, marked the 50th anniversary of diplomatic ties between the two nations, at the Great Hall of the People on September 20, 2010. China reciprocated with an official visit in November 2011, by the Vice-Chairman of the Standing Committee of the National People’s Congress of China, Zhou Tienong who visited Ghana and met with Ghana’s President John Dramani Mahama.

The Islamic Republic of Iran and the 6th President of Iran, Mahmoud Ahmadinejad met the 12th President of Ghana, John Dramani Mahama on 16 April 2013 to hold discussions on strengthening the Non-Aligned Movement and also cochair a bilateral meeting between Ghana and Iran at the Ghanaian presidential palace Flagstaff House. Government of Ghana reciprocated it with an official state visit on 5 August 2013, by the Vice-President of Ghana, Kwesi Amissah-Arthur who met the Vice-President of Iran, Eshaq Jahangiri to discuss at the Islamic Republic of Iran’s presidential palace, Sa’dabad Palace to discuss autarky and possible bilateral leader.

Footsteps of the Economy

Ghana is an average natural resource enriched country possessing industrial minerals, hydrocarbons and precious metals. It is an emerging designated digital economy with mixed economy hybridization and an emerging market with 8.7% GDP growth in 2012. It has an economic plan target known as the “Ghana Vision 2020”. This plan envisions Ghana as the first African country to become a developed country between 2020-29 and a modern industrialized country between 30- 39. This excludes fellow Group of 24 member and Sub-Saharan African country South Africa, which is already a newly industrialized country.

The Ghana economy is an emerging digital-based mixed economy hybrid similarly to that of Taiwan with an increasing primary manufacturing and exportation of digital technology goods along with assembling and exporting automobiles and ships, diverse resource rich exportation of industrial minerals, agricultural products primarily cocoa, petroleum and natural gas, and industries such as information and communications technology primarily via Ghana’s state digital technology corporation Rlg Communications which manufactures tablet computers with smart phones and various consumer electronics Ghana produces and exports an abundance of hydrocarbons such as sweet crude oil and natural gas. The 100 per cent state-owned filling station company of Ghana, Ghana Oil Company (GOIL) is the number 1 petroleum and gas filling station of Ghana and the 100% state-owned state oil company Ghana National Petroleum Corporation (GNPC) administrates hydrocarbon exploration and production of Ghana’s entire petroleum and natural gas reserves and Ghana aims to further increase output of oil to 2.2 million barrels (350,000 m3) per day and gas to 34,000,000 cubic metres per day.

In July 2013, International Enterprise Singapore opened its 38th global office in Accra, Ghana to develop trade and investment on logistics, oil and gas, aviation, transportation and consumer sectors. Singapore and Ghana also signed four bilateral agreements to promote public sector and private sector collaboration, as Ghana aims to predominantly shift its economic trade partnership to East Asia and Southeast Asia. Ghana has slowly and steadily creating its impact on the world. It is one of the most established and rapidly growing countries of Africa. The ‘warrior king’ is at its best…