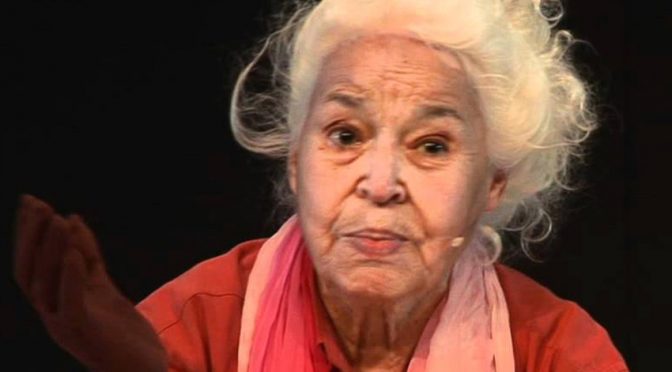 “I am becoming more radical with age; I have noticed that writers, when they are old, become milder. But for me it is the opposite. Age makes me angry.” – Nawal El Saadawi

Nawal El Saadawi, an Egyptian public health physician, psychiatrist, author, and advocate of women’s rights was born on October 27, 1931 in Kafr Tahla, a small village outside of Cairo. Saadawi was a feminist whose writings and professional career were dedicated to political and sexual rights for women. El Saadawi was raised in a large family, which was relatively traditional, as a result of which Saadawi was “circumcised” at the age of six. However, Saadawi’s father emphasized that all his children be educated. Saadawi describes her mother as “a potential revolutionary whose ambition was buried in her marriage.” Her mother died at the age of 25, and her father shortly thereafter, both unable to witness the incredible accomplishments of Saadawi. Despite limitation imposed by both religious and colonial oppression on rural women, Saadawi attended the University of Cairo and graduated in 1955 with a degree in psychiatry. After completing her education, El Saadawi practiced psychiatry and eventually rose to become Egypt’s Director of Public Health. El Saadawi met her husband, Sherif Hetata, also a doctor; while working in the Ministry of Health, where the two shared an office together. Hetata shared El Saadawi’s leftist views: himself having been imprisoned for 13 years for his participation in a left-wing opposition party. Saadawi is the author of 56 books and has been imprisoned for her writing, which condemns how women have and continue to be treated in the Middle East. “We’re not living in three worlds, we’re living in one,” says Nawal el Saadawi in front of a rapturous crowd at a poky radical North London bookshop. One of the Arab world’s most important living thinkers, Saadawi has a talent for seeing things holistically. For example, she does not delineate between her professional roles of a doctor, an author, and an activist. Nor does she extricate women’s rights (or lack of) in her home country, Egypt, from the neo-colonial imperatives of Western powers. She sees religion and politics as two sides of the same coin, since both are instruments of control. And she believes that we are all – from Egypt to the UK to India to America – subjugated within one big fat “postmodern slave system.” At the age of 83, Saadawi has spent her entire life laboring these points. Her literary output spans 56 books – books that have unceasingly challenged the status quo of patriarchal, religious, and capitalist power structures.

Saadawi was educated at Cairo University (M.D., 1955), Columbia University in New York (M.P.H., 1966), and Ayn Shams University in Cairo (where she performed psychiatric research in 1972–74). In 1955–65 she worked as a physician at Cairo University and in the Egyptian Ministry of Health: and in 1966 she became the Director-General of the health education department within the Ministry. In 1968, she founded Health magazine, which was shut down by Egyptian authorities several years later, and in 1972 she was expelled from her professional position in the ministry of health because of her book Al-marah wa al-jins (1969; Women and Sex), which was condemned by religious and political authorities. El Saadawi was jailed in September 1981, and during the two months of her imprisonment she wrote: Memoirs from the Women’s Prison on a roll of toilet paper using a smuggled cosmetic pencil. This book was published in 1984. In 1982, El Saadawi founded the Arab Women’s Solidarity Association (AWSA) and later served as editor of the organization’s publication, Al-nun. In 1991 the government closed down Al-nun and then, several months later, AWSA itself. Due to her outspoken views, El Saadawi continued to face frequent legal challenges from political and religious opponents, including accusations of apostasy. In 2002, a legal attempt was made by an Islamist lawyer to forcibly divorce her husband, and in May 2008 she won a case that had been filed against her by al-Azhar University, the major center of Islamic learning, that included charges of apostasy and heresy. El Saadawi’s novels, short stories, and nonfiction mainly dealt with the status of Arab women – as in 1960; Memoirs of a Woman Doctor, 1972; The Thread and the Wall, 1977; The Hidden Face of Eve: Women in the Arab World, 1993; Love in the Kingdom of Oil, and 2004. In 1992, she wrote, Jannat and Iblis, in which she mentions about the oppression of women by men through religion is the underlying theme of El Saadawi’s novel set in a mental institution. The female protagonists are Jannat, whose name is the plural of the Arabic word for paradise, and Iblis, whose name refers to the devil.

And she makes it her own

She is founder and president of the Arab Women’s Solidarity Association and co-founder of the Arab Association for Human Rights. She has been awarded honorary degrees on three continents. In 2004, she won the North–South Prize from the Council of Europe. In 2005, she won the Inana International Prize in Belgium, and in 2012, the International Peace Bureau awarded her the 2012 Seán MacBride Peace Prize. Nawal el Saadawi has held the positions of Author for the Supreme Council for Arts and Social Sciences, Cairo; Director General of the Health Education Department, Ministry of Health, Cairo, Secretary General of the Medical Association, Cairo, Egypt, and medical doctor at the University Hospital and Ministry of Health. She is the founder of the Health Education Association and the Egyptian Women Writers Association; she was Chief Editor of Health Magazine in Cairo, and Editor of Medical Association Magazine.

The time behind the bars

Long viewed as controversial and dangerous by the Egyptian government, Saadawi helped publish a feminist magazine in 1981 called “Confrontation”. She was imprisoned by President of Egypt Anwar Sadat, however she was released after the President’s assassination in October 1981. Although she was denied pen and paper, El Saadawi continued to write in prison, using a “stubby black eyebrow pencil” and “a small roll of old and tattered toilet paper.” Of her experience she wrote: “Danger has been a part of my life ever since I picked up a pen and wrote. Nothing is more perilous than truth in a world that lies.” Saadawi was one of the women held at Qanatir Women’s Prison. Her incarceration formed the basis for her memoir, Memoirs from the Women’s Prison, 1983. Her contact with a prisoner at Qanatir, nine years before her,imprisonment served as inspiration for an earlier work, a novel titled Woman at Point Zero, 1975. Even after her release from prison, El Saadawi’s life was threatened by those who opposed her work, mainly Islamic fundamentalists, and armed guards were stationed outside her house in Giza for several years until she left the country to be a visiting professor at North American universities. El Saadawi was the writer in residence at Duke University’s Asian and African Languages Department from 1993- 1996. She also taught at Washington State University in Seattle. However, she continues to stay in Eygpt.