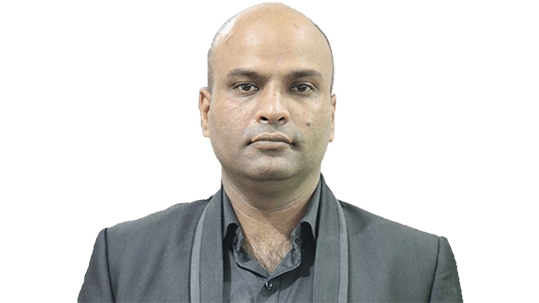 Q. What was the inspiration behind building Accuster?

A. I am a graduate from IIT Roorkee (Mechanical Engineering), and I did my masters in Biomedical Engineering from the United States of America. I have also worked at Universal Studios, Hollywood as a business consultant.

There was a strong hitch about what has been given back to the country? I came back to India with a simple vision – to solve the basic problems of the society by doing the groundwork; by building technological innovations. We are the ones who have to solve the problems of our country – not China, not America. The first problem we identified was that about 95 crore people of India were not getting quality diagnostics.

Organs such as liver or kidney get damaged and people do not even realise what happened to them. My father
died of jaundice in 1993 because the detection of bilirubin got late.

If a middle-class family was facing this, we can imagine what families residing in rural areas must be going through. We went deep enough to understand the problem and identified that the technologies that we are using in medical colleges were never designed and built according to the current Indian challenges. The challenges included taking the technology to rough terrains and rural areas, lack of power and skilled manpower in rural areas to operate those technologies. In such circumstances, the technology remains unused without benefitting the people on the ground.

Understanding that particular problem we developed, not the product, but the technology and went on to develop the first pathology lab in a suitcase. The beauty of this lab is it is very rugged – I can drop it from two feet height and the reading will not change. It can operate in extreme temperature conditions of 2-degree centigrade in Leh-Ladakh area to 50-degree centigrade in deserts. Resultantly, the Indian army is using our labs in all the field hospitals, in the complete Himalayan belt from Kargil to Arunachal Pradesh and Nagaland. The Border Roads Organization, which is again working in tough terrains, is using our labs.

More than 100 NGOs such as Tata Trust, Reliance Foundation, Ramakrishna Mission, Helpage India, DLF Foundation, Americare, Hans Foundation, who take the services to the people on the ground are using our lab.

This lab was launched by the former President of India, Pranab Mukherjee on 11th May celebrated as “Technology Day”.

The problem was that 95 crore people in India are not getting quality diagnostics and we can serve only 0.1 per cent of the population. Only a viable model could solve this problem. On a country-scale, it can only happen when there is village youth who are building themselves as entrepreneurs, run this as a livelihood manner.

We soon realised that merely the lab in a suitcase could not reach enough people. Hence, we took a Nano car to take this lab to remote places. However, we soon found out that it was an unviable model with the cost of the driver, the charge per kilometre and the depreciation cost being so high that even Nano, which is the most affordable car in India was not viable.

Now we were very clear that the lab has to come on a bike. Then we went one step further, spent three years of extensive research to build the complete lab on a bike.

With one rupee per kilometre as the riding cost and the ability to reach directly at the doorstep, LaBike was the perfect concept that could serve the vision of bringing primary care to the 95 crore people.

After developing the model, there was a need to empower the local youth by training them so that they can provide these services to the people on the ground.

We, therefore, invented a complete training and skilling framework, in which we miniaturized the two or three-year program to a four-month program. We quantified and assessed the skills like haematology slide making and slide breeding so that after the training is complete, the trainees have the skills in hand to operate the labs.

Our trained technicians are now being used by powerful institutions such as Reliance Foundation and Tata Trusts. We have signed a Memorandum of Understanding (MoU) with four states: Bihar, Uttar Pradesh, Tamil Nadu and Maharashtra, where we are training the local village youth who are underprivileged. There was a time when they were struggling to manage three meals of the day, but now they are supporting their families as well as saving people’s lives on the ground.

Our lab can be monitored for its quality without the internet. The device can directly tell how many tests are being performed on this device without any intervention.

When I met the Deputy Health Minister of Zimbabwe, he told me that this is exactly what they were looking for since long. The most important reason we build this technology was for Quality Control. Every automated laboratory follows the quality control protocol – L1, L2. There is an artificial human serum with which you get a booklet in which the standard values are mentioned. You take the sample on the device and get the readings.

In remote locations, however, people do not put quality control for three months at length. Even if the device is giving wrong readings, they will never know that it is a wrong reading. Not running the QC protocol, which has to be run daily, is a violation of the international protocol.

And this was happening at the level of hospitals, where they were ignoring the quality. So imagine the scenario at a primary health centre level.

Hence, even in a remote location or peripheral areas, we can make the lab technicians accountable.

We have done ten years of extensive research and have more than 25 patents. There is a line of innovations. The most important thing to understand is Accuster has a holistic framework capable of delivering high-quality diagnostics right at the doorstep.

Basic homework needs to be done in the background. It is not like a product of LED that I sell it and the customer starts using it. We need to train local youth and make sure that the quality is ensured; we need to modify the technologies to make sure that satellite control can be operated from over there.

Countries like Vietnam and Nepal have shown interest and we will probably close the deal within the month-end.

Q. Have you found any local partner in any of the African countries?

A. The African Ambassadors in India have shown a great deal of interest, especially the Ambassadors of Ghana, Nigeria, Zimbabwe and Sudan. We are looking for three things in a partner:

Only financial strength is not enough to operate Accuster innovation in the country. We are looking for farsighted people who share the vision to reach and serve the masses.

Second, we need government liaisoning and third we need financial strength equal to the population of the country. If these three categories are fulfilled, then we discuss the proposals at the board meeting and the board decides whether this partnership has to be done or not. Zimbabwe, Nigeria and Ghana are the three countries we are currently focussing on for such partnerships.

Q. What kind of support are you seeking from the Indian government?

A. The start-up ecosystem has to be looked at in a more friendly and supportive manner. Indian Prime Minister Mr Narendra Modi has a vision of 50,000 start-ups in India. Though, there has to be stronger financial support for the start-ups to grow so that they can expand the way they want to. That freedom should be given to them.