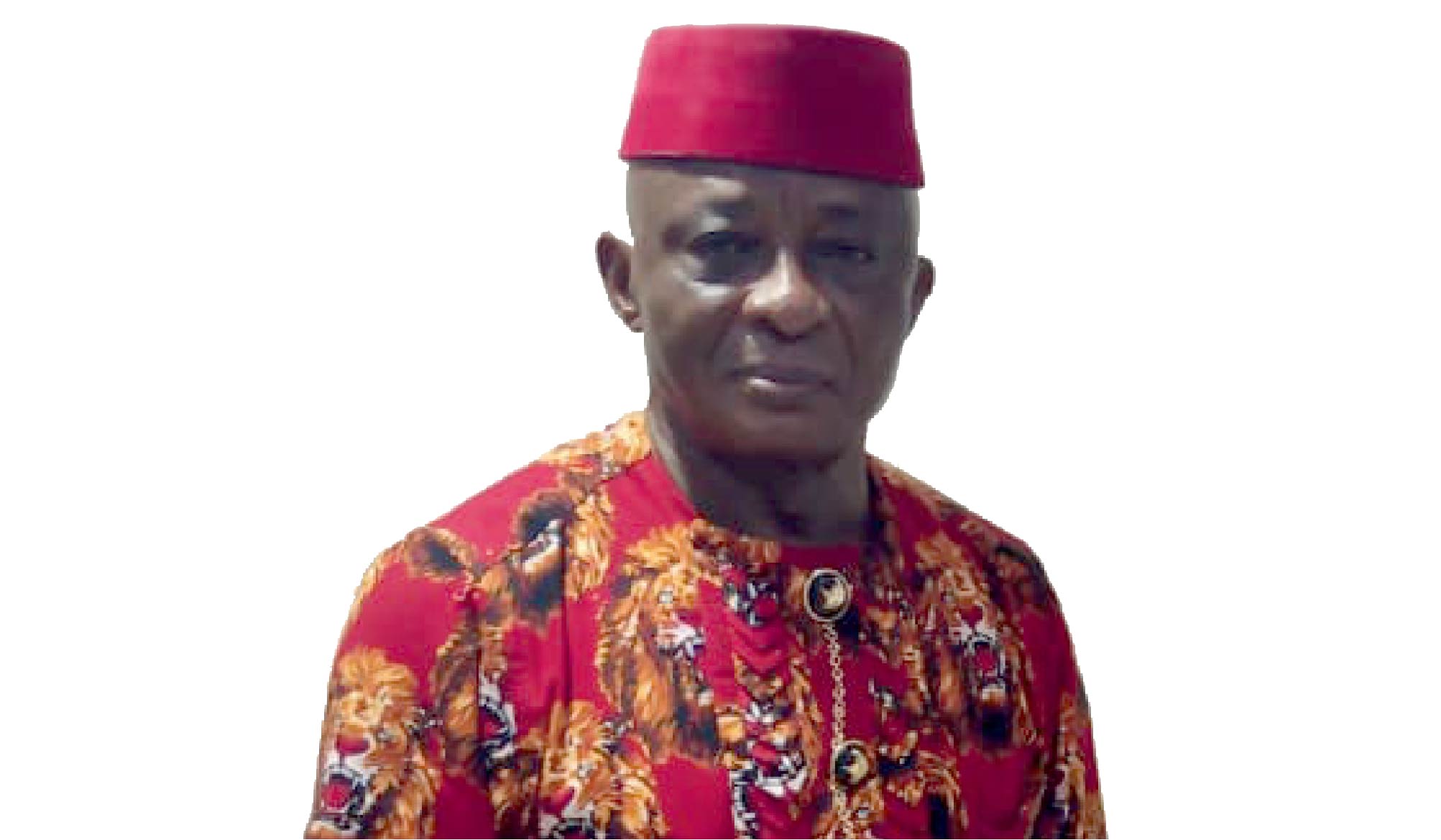 Said Honourable High Commissioner of Nigeria to India, H.E. Major General Chris S. Eze (Rtd.) in an interview with The Times of Africa on June 28, 2019. He further elaborated on his experiences, the impending visit of the Nigerian President to India and the immense opportunities in Nigeria.

As the Nigerian High Commissioner to India, kindly elaborate on your experience and responsibilities – from the day you presented your credentials till today?

Well, I took office here on November 1, 2017. Then I presented my credentials to the Honourable President of India, Mr Ram Nath Kovind on November 23. Since then, I have been carrying out my duties.

The duties of the ambassador can be said to be five-fold:

The second one is to promote trade and business between the two countries.

The third one is to cater to the interests of the Nigerian citizens in India.

The fourth one is to administer my mission.

And the fifth one is to present myself in such a way that I give a positive image of my country Nigeria, which I am representing.

I have done my best and I am happy to say that our efforts have yielded success.

Nigeria and India have never been on opposite sides of any subject of importance – be it bilateral or multilateral.

Nigeria was with India in the non-Aligned movement. India and Nigeria were together in the anti-apartheid movement. India opened a diplomatic mission in Lagos, Nigeria in 1958, even before we got our independence, which was in 1960.

The foresight of the Nehru government, which was then in power, was considerable because they had foreseen the potential in the relationship between the two countries.

Just the other day, when an Indian candidate contested with a candidate from Britain in the International Court of Justice, Nigeria played an active part in galvanising other African countries to vote for the Indian candidate.

With high-level visits, from Indian side to Nigeria and from Nigerian officials to India shows the depth of the relationship we have.

There is a long-standing invitation that was extended by the Indian Prime Minister, Mr Narendra Modi to the Nigerian President, Mr Buhari to visit India. My President was about to honour that in 2017 when he got some health challenges. Now that he is fully fit, has won the election and Prime Minister Modi is back too, we are hoping that in the not too distant future that visit will come to fruition.

In fact, we have started working on the deliverables we can take away in terms of potential business investments. That will be at the government level.

Nigeria is a country of two hundred million people. It is blessed with natural endowments. Apart from that, it is the hub of ECOWAS, the Economic Community of West-African States.

Trade is booming – it is in excess of 10 billion now and it will continue to grow. They are about 180 Indian companies already operating in Nigeria. Outside of the Dangote group, the Indian companies combined together are the next largest employers of labour in the private sector in Nigeria – if they are collectively taken together.

Therefore, the opportunities are immense.

I am very happy that great interest is being shown by the Indian business community. I get invited everywhere by the various Chambers of Commerce. In fact, I just came back from Kolkata, where I had meetings with the West-Bengal Chamber of Commerce.

With President Buhari coming back to power means continuity in policy. We are taking various steps in ease of doing business.

The Indian High Commission in Nigeria in Abuja is encouraging people to come to Nigeria.

In medical tourism, we encourage the investors in the health industry to remember that ultimately it is going to be in the interest of India to branch out to Nigeria because the market will continue to grow.

When it comes to consular affairs, earlier there was a disconnect between the Nigerian mission as an establishment and the Nigerian residents here. However, we have managed to include them. They have come together, written a constitution, and used it to elect an Executive.

When it comes to running the mission, we share a respectful relationship with the local employees and finally when it comes to my conduct as an envoy, it is for people that I have interactions with me to decide whether they are impressed or not.

Whenever we talk about Nigeria’s business, the name of Dangote group always dominates the conversation. Aliko Dangote is one of the richest men in Africa. If one person can do it, how can we replicate this success for other entrepreneurs in Nigeria?

Aliko Dangote is playing a pivotal role in Nigerian economy. He is into agriculture, cement, food processing, you just name it. He has now ventured into refinery. He is building a refinery with a designed capacity of 650 thousand barrels of crude oil per day. This is going to have a huge impact on the Nigerian economy. It will bring in foreign exchange that currently goes to waste in importing refined oil.

It is very unfortunate that we have been producing oil for such a long time but did not have a refined capacity to meet our needs.

When this refinery becomes functional, it is going to meet the domestic demand and export to the neighbouring countries as well. In fact, the projection is that in the first year, the exports of the Dangote group, including cement and all other things, will bring 700 million dollars to the Dangote group, which is the net inflow into the Nigerian economy.

That is important because the stability of the Naira, which is our local currency, depends largely on the amount of foreign exchange we have in order to import our own needs.

It is also going to make the subsidies that the government injects into stabilising the prices of petroleum products more transparent because everything will happen within Nigeria.

Apart from injecting foreign currency into the Nigerian economy, the derivatives of the refinery will be used for making plastics and agricultural products. One Indian company, which is called Uflex, owned by Mr Chaturvedi, has already laid a foundation last March of a hundred million dollar factory in Lagos that is going to use the by-products of Dangote refinery to manufacture plastic containers.

Dangote resonates very well because apart from being active in Nigerian economy, he also owns cement plants in other places such as Zambia. Dangote refinery has a lot of Indians engaged in training the engineers, who are going to operate the refinery. So the cooperation of India is very critical.

The power plant for Dangote refinery is being built by SkipperSeil, which is owned by an Indian called Mr Jitendra Sachdeva.

There are also other Nigerians who are successful. They own banks for instance, that operate in the entire West Africa and Central Africa. That is part and parcel of the interconnectivity in Africa.

Anybody who has an entrepreneurial spirit and can take risks can succeed. There are so many places in Nigeria where you can invest. We are trying to diversify our economy from dependency on oil to two major areas to anchor this diversification – the first is mining and the second one is in agriculture.

Moving to air traffic hubs, Air Peace, which is a Nigerian carrier, is going to start direct flight between Nigeria to India in a couple of months. The negotiations have gone to an advanced level now.

Initially it is going to fly from Lagos to Mumbai. After entering into an agreement with Air India, it will distribute passengers within India to places like Delhi, Hyderabad, Pune and Bangalore. This will make Lagos and Abuja air hubs of West Africa.

Somebody who is travelling to Ghana or Senegal may not need to go through the conventional route that they used to come before.

Kindly tell us about the IT sector developments in Nigeria?

The IT sector in the country is exploding. Take for instance, the penetration of mobile communication. More than a 100 million have access to handsets. Airtel, which is an Indian company, is one of the service providers and is very active in Nigeria. Airtel along with MTN and Glo, are the biggest service providers in the country.

The banking system now has an IT backbone and it has made all manner of banking operations seamless. IT education is being taken seriously – both formally in schools and informally by individuals.

In every Nigerian town, you will find a GSM village. The GSM village is where they repair phones. They may not run certified institutions but they teach all kinds of web applications and mobile repair maintenance mechanisms.

Our national identification system is also being actively undertaken. In fact, the National Identity Management Commission (NIMC) of Nigeria has granted Diaspora License to UGS Technologies Limited to provide data capture and enrolment services for the issuance of the National Identification Number (NIN) to Nigerian citizens in India.

It is the basic equivalent of the Aadhar card that you have here.

People are aware about the Nigerian culture through Youtube. All this is anchored on IT awareness. This is something that we are trying our best to keep up with the rest of the world.

Even today, a number of people are hesitant to go to Nigeria because of the stereotypes about the country. What is your message to them?

The only thing I want to say is that if you want to know about Nigeria and you want to take advantage of the opportunities, try to overcome the stereotyping.

The people that really did resist the stereotyping were the Chinese. They went to Africa and made such a huge success of the continent and its strengths.

People often ask why Africa allowed the Chinese to penetrate so much. The answer is Africa is a free continent. If you want to go to Africa and invest in the continent, you can go and we will help you identify the investment potentialities through our institutional mechanisms. If you make a success of it, it is all yours.

In a globalized world, stereotyping does not do anybody, any good.

If they choose to remain within the confines of their mental horizons, that is their choice. But it is in their interest to begin to think global. India is now in itself a global power – both in terms of soft power through, for example, its film industry and in terms of hard power through nuclear weapons. It also holds a strong place in terms of demographic endowments by having more than one billion people inhabitants.

The powers that are not thinking globally and receding to micro-nationalism, I am sure that even their populations are telling them that it is not the way to go.  When you become a world power, you have to think globally.

Government of India should consider issuance of work permits and import licenses to Nigerians in India to enable more of them engage in legitimate business and reciprocate a fraction of the privileges, which are already being enjoyed by Indians in Nigeria.