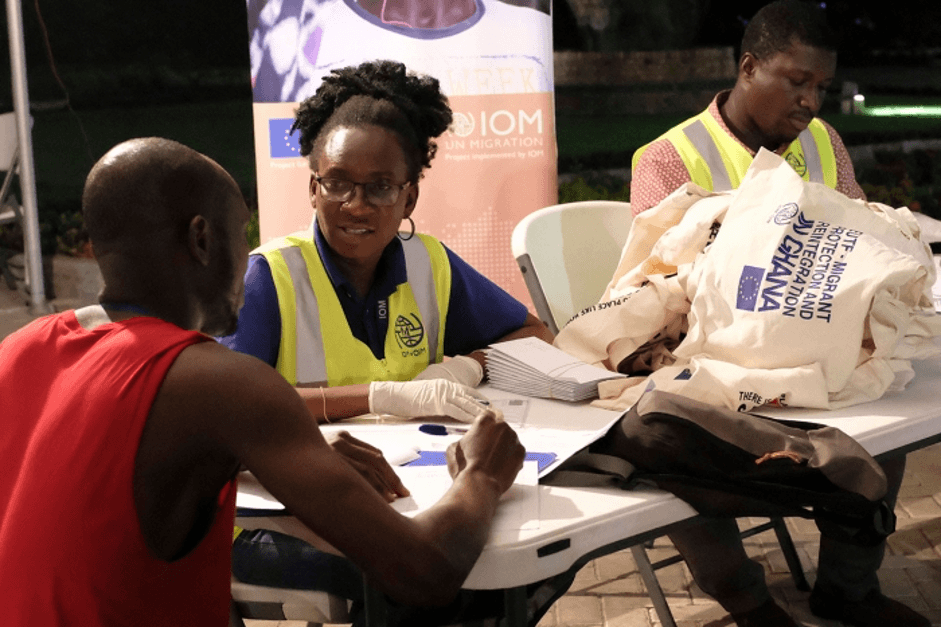 The International Organization for Migration (IOM) has been assisting 61 migrants stranded voluntarily to Ghana in Niger, bringing the total number of supported Ghanaians to 1,400 since 2017. The immigrants returned on their way to Libya from Niger by road. IOM joined local authorities when they arrived in Accra, Ghana’s capital, to provide assistance, including cash, pocket money, to meet their immediate needs and, in particular, transport to their final destinations. The IOM staff said smugglers had submitted to the “lucrative” deals, in spite of the well-known risk, to convince them to set off for Libya. “The smuggler showed me pictures of Benghazi, a seemingly peaceful place where we would work,” explained one returnee, Koffi. “Once in Niger, the reality was different. Today, I am happy to be back. I would never advise anyone to embark on such a journey.”

On their return, migrants have the right to reintegration assistance, including counseling, referrals to existing programs and medical and psychological assistance. Returned individuals may also become part of community-based collaborative projects in which they work together and return. A joint EU-IOM project to support refugees from Ghana and 25 other African countries migrated along the major migratory routes and returned home to reintegrate into their local communities was launched in 2017. The EU-IOM initiative was launched.  Up to 300 migrants have been reintegrated, 934 have been released and 673 have been helped by psychosocial assistance. IOM also works with its partners to raise awareness of the dangers associated with irregular migration and to encourage healthy migration campaigns. Since 2017, there have been 124 awakening sessions in local communities and schools, with radio and TV broadcasts reaching about 200,000 Ghanaians across the country with similar messages.

“We continue to work with our various partners to ensure that laws and policies are in place to guarantee that people have access to rights and basic services here in Ghana, and to ensure no one is left behind,” said Sylvia Lopez-Ekra, IOM Chief of Mission in Ghana said of the returnees.

“We need to encourage communities to embrace returnees and help them re-establish themselves. We need to engage with our youth – who are the future of the country and tend to risk their lives to find greener pastures elsewhere.”