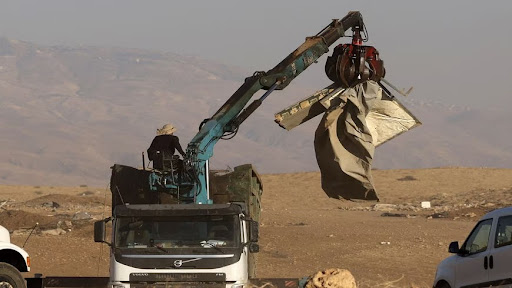 Dozens of Palestinians who live in the Bedouin community Ras al-Tin in the Jordan Valley were caught by surprise when Israeli forces raided the area July 14 and confiscated 49 structures of residents and their cattle, which constitute the source of income of 84 Palestinians.

Ras al-Tin is one of several herding communities in the Jordan Valley. It is located in Area C, which is under full Israeli control, as per the Oslo Accord.

Ersheidat said that 13 families from the community were directly affected by the confiscation and attacks. He noted that they received some aid, such as tents, from citizens and the Colonization and Wall Resistance Commission, but that this assistance is not enough. The community consists of 37 families with more than 300 individuals, and there is an urgent need to foster people’s resilience, in light of Israel’s measures aimed at displacing them from their land.

On July 7, the Israeli forces caused extensive destruction in Khirbet Hamsa al-Fouqa in the northern Jordan Valley, destroying citizens’ homes, including tents and animal pens, and forcibly expelling the residents with military trucks to another area in the Jordan Valley. Eleven families were made homeless and displaced by that operation.