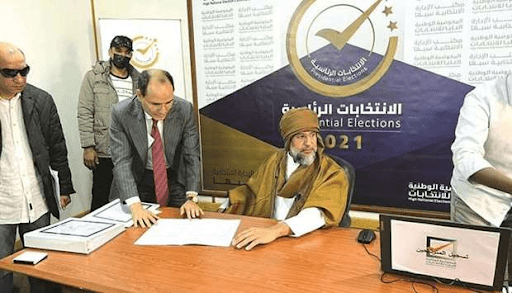 Photo source: Saif al-Islam Gaddafi, son of Libya’s former leader Muammar Gaddafi, registers as a presidential candidate for the election, in the southern town of Sebha.
Spread the news

According to Libya’s election agency, the son of late Libyan dictator Moammar Gadhafi, Seif al-Islam announced his candidacy for the country’s presidential election next month on Sunday.  He is Gadhafi’s one time heir apparent.

Gaddafi is one of the most visible – and divisive – personalities anticipated to run for president, with eastern military commander Khalifa Haftar, Prime Minister Abdulhamid al-Dbeibah, and parliament speaker Aguila Saleh.

But, despite having one of the most well-known names in Libya, and having once played a prominent role in determining policy prior to the 2011 NATO-backed uprising that toppled his family’s leadership, he hasn’t been seen in a decade.

He has already submitted his candidacy papers in the Southern Town of Sabah. A video was released in which Seif was seen in a traditional Libyan robe, turban and spectacles, by the elections office where he registered, saying that God will decide the right path for the country’s future.

Seif was captured by fighters late in 2011 and after some time his father was killed amid the ensuing fighting that would turn into a civil war. Since he was seized during the battle in 2011, the only time his fellow Libyans had seen him in public was when he appeared by videolink before a Tripoli court, when he was sentenced to death for war crimes.

Despite that ruling, he never left the hilly Zintan region, outside the reach of Tripoli authorities, where his captors later released him.